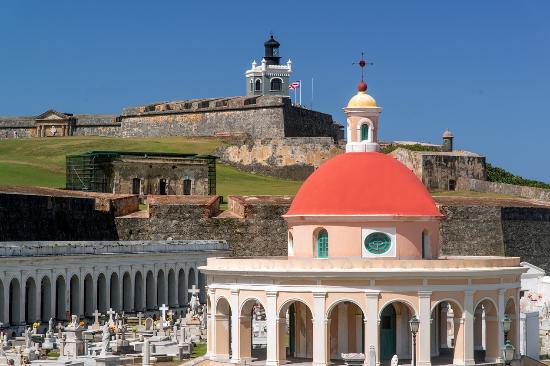 News Americas, NEW YORK, NY, Fri. June 24, 2016: Many travel to the Caribbean for the sea, sun and sand – and some for the weed and sex – but many also take time out to visit some of the many landmarks across the region. While they are not in the world’s top 10, many did make their way into the Trip Advisor Top 10 for the region for 2016. Here they are:

Taking the number one spot is the Castillo San Felipe del Morro in San Juan, Puerto Rico. It is also known as Fuerte San Felipe del Morro or Morro Castle and is a 16th-century citadel that was named in honor of King Philip II of Spain. In 1983, the citadel was declared a World Heritage Site by the United Nations in conjunction with the San Juan National Historic Site. Over two million visitors a year explore the Castillo, making it one of Puerto Rico’s leading tourist attractions. El Morro was also used as a film set in the 1996 motion picture Amistad. Steven Spielberg used it to represent a fort in Sierra Leone where African slaves were auctioned in 1839. 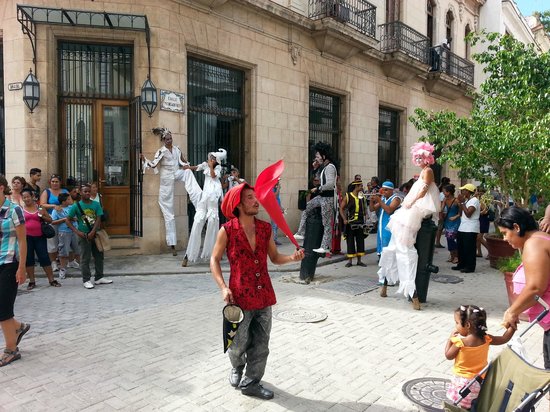 In the number two spot is Old Square (Plaza Vieja) in Havana, Cuba. The plaza was originally called Plaza Nueva (New Square) and emerged as an open space in 1559, after the Plaza de Armas and San Francisco. In colonial times it was a residential neighborhood of the Criollo plutocracy. Plaza Vieja was the site of executions, processions, bullfights, and fiestas – all witnessed by Havana’s wealthiest citizens, who looked on from their balconies. The square has also been identified by other names such as Plaza Real, Mayor, Mercado, Fernando VII, Plaza of the Constitution, Park Juan Bruno Zaya and Park Julian Grimau. Since the early eighties, once Old Havana was declared World Heritage Site by Unesco, architects and restorers began a restoration project. 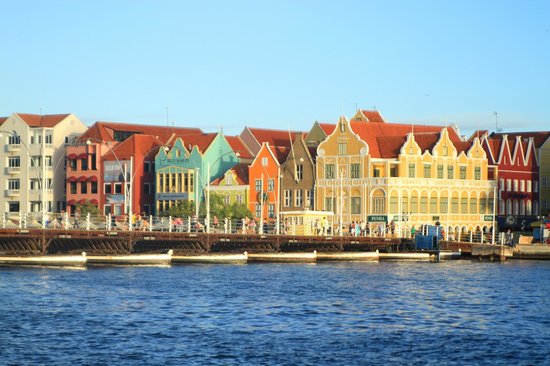 At number three of the top 10 list is the Queen Emma Pontoon Bridge in Willemstad, Curacao. The Bridge is a pontoon bridge that sits across St. Anna Bay in Curaçao. It connects the Punda and Otrobanda quarters of the capital city, Willemstad and is hinged. It opens regularly to enable the passage of oceangoing vessels. On the opposite end from the hinge is a small shelter where an operator controls two diesel engines turning propellers. The propellers are mounted perpendicular to the length of the bridge and allow it to swing parallel to the shore. The process only takes a few minutes to complete. The bridge was built in 1888 and was completely renovated in 1939. Originally it was a toll bridge. Individuals without shoes were permitted to cross the bridge without paying the toll; however, today, a toll is no longer applied. When the bridge swings open, two ferries spring into action to bring pedestrians across the water. The ferries are also free of charge. 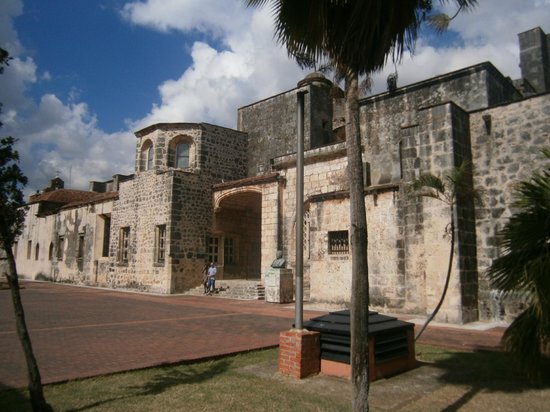 The Catedral Primada de America located between Calle Arzobispo Merino and Isabel la Católica, next to Columbus Park in the city of Santo Domingo de Guzman in the Dominican Republic takes the fourth spot. The Cathedral is dedicated to St. Mary of the Incarnation. It is the oldest cathedral in the Americas. Building begun in 1512 and it was completed in 1540. The Cathedral was commissioned by Pope Julius II in 1504. It has a treasury containing retablos, paintings, old woodwork, furniture, sculptures and tombstones. 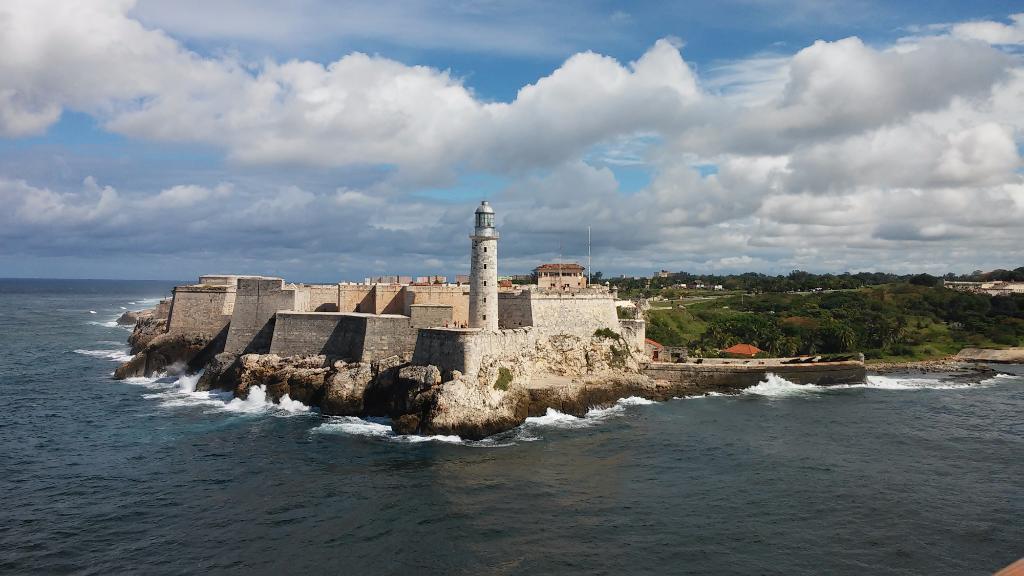 Taking the fifth spot is the Castillo del Morro Castle in Havana, Cuba. It is named after the three biblical Magi and is a fortress guarding the entrance to Havana bay. Perched on the promontory on the opposite side of the harbor from Old Havana, it can be viewed from miles around as it dominates the port entrance. It was built initially in 1589 in response to raids on Havana harbor. The cannons around the fort are now badly rusted, but the walls are well preserved. The fort has central barracks up to four stories high. A small underwater archeology exhibition is also located here. Noteworthy are the old latrines and their chute into the sea, as are the two sets of doors and the drawbridge mechanism. 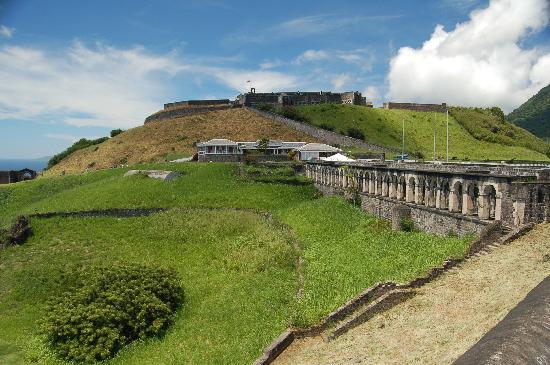 Brimstone Hill Fortress National Park is located in St. Kitts and Nevis and is a UNESCO World Heritage Site and takes the sixth spot. It is a well-preserved fortress on a hill on the island. It was designed by British military engineers, and was built and maintained by African slaves. It is one of the best preserved historical fortifications in the Americas. Brimstone Hill sits on a very steep sloping hill situated close to the sea on the Western, Caribbean coast of the island. The fort was actually abandoned by the British in 1853 but stabilization and restoration of the remaining structures of the fortress started in the early 1900s. In 1973, HRH Prince Charles reopened the first area to be completely restored, which was the Prince of Wales Bastion, shown here at the top of the article. In 1985, Britain’s Queen Elizabeth II unveiled a plaque naming Brimstone Hill as a National Park. Legislation in 1987 officially declared Brimstone Hill to be a National Park, and it was declared a UNESCO World Heritage Site in 1999. 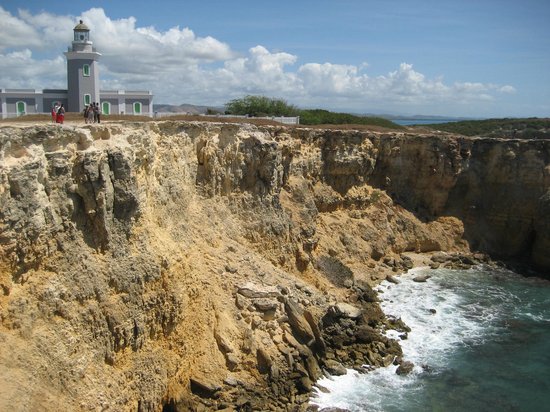 Los Morrillos Light is a historic lighthouse located in the municipality of Cabo Rojo, Puerto Rico and makes it to number 7. It was constructed in 1882 in order to guide passing ships through the southeast entrance from the Caribbean Sea through the treacherous Mona Passage into the Atlantic Ocean. The lighthouse is located over a white lime cliff which is surrounded by salt water lagoons and marshes. The cliffs surrounding the lighthouse drop over 200 feet into the ocean. Originally, the lighthouse was manned by two keepers and an engineer, who lived on the grounds with their families. In 1967 the lighthouse was renovated and its operation is currently completely automated. 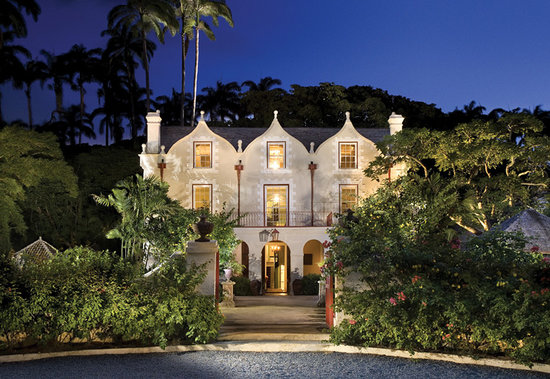 St. Nicholas Abbey is located in the parish of St. Peter in Barbados and is listed as the eighth top landmark in the Caribbean. It was built in 1658 and is one of only three genuine Jacobean mansions in the Western Hemisphere. The house appears to have been built by Colonel Benjamin Berringer. His neighbour, friend and business partner was John (later Sir John) Yeamans, however, reportedly began to pay attention to Mrs. Berringer and a feud erupted between Yeaman and Colonel Berringer, culminating in a duel in which Berringer was killed. Soon afterwards, Sir John married Mrs. Berringer and claimed the Abbey. A court ruling later returned the property to Berringer’s children and the property was named after Berringer’s grand-daughter who married George Nicholas.

It’s curved Dutch gables, chimney stacks and coral stone finials are well preserved as are the Chinese Chippendale staircase and fine antiques and china. The grounds are beautifully landscaped with tropical flora while the natural gullies are home to Mahogany and Silk Cotton trees.

Visitors can also explore the steam mill and rum distillery which are now in full operation and are used to produce the St. Nicholas Abbey Rum. You may purchase rum and other sugar products at the gift shop. 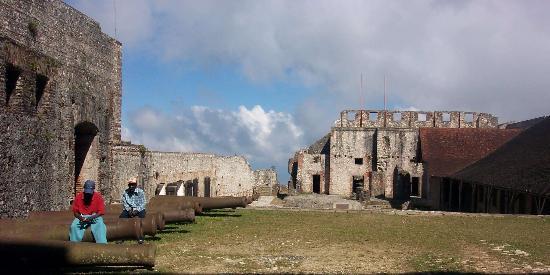 The Citadelle Laferrière, Citadelle Henry Christophe, or simply the Citadelle is a large mountaintop fortress in northern Haiti, located on top of the mountain Bonnet a L’Eveque, approximately 17 miles south of the city of Cap-Haïtien and five miles (8 km) uphill from the town of Milot.  It is one of the largest fortresses in the Americas and was designated by the United Nations Educational, Scientific and Cultural Organization (UNESCO) as a World Heritage Site in 1982—along with the nearby Sans-Souci Palace. The mountaintop fortress has itself become an icon of Haiti. The Citadel was built by Henri Christophe, a key leader during the Haitian slave rebellion (1791-1804), after Haiti gained independence from France at the beginning of the 19th century. The massive stone structure was built by up to 20,000 workers between 1805 and 1820 as part of a system of fortifications designed to keep the newly independent nation of Haiti safe from French incursions. The Citadel is today one of the most popular tourist destinations in Haiti and the ninth top land mark region wide. 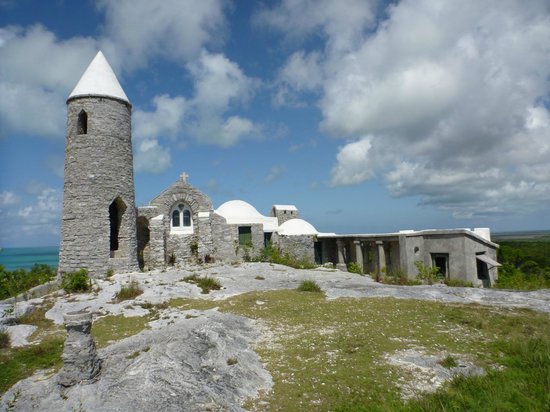 The Heritage rounds out the top 10 attractions. It is located on Cat Island, Out Islands on Mount Alvernia, the highest point in The Bahamas at 206 feet (63 meters). This small stone monastery built by hand by the architect hermit, Father Jerome, is at the peak and is worth the trek up this steep rocking incline, as well as the awe inspiring view. It is said to be reminiscent of La Verna, the hill in Tuscany that was given to St. Francis of Assisi as a place where he could peacefully contemplate, and is reportedly where Assisi received the Wounds of the Cross.  The way up the hill to the monastery is via a stone staircase on a steep rocky incline. You can see Father Jerome’s beautiful and detailed hand-carved stone reliefs of the Stations of the Cross along the way, and the 360-degree view around the lush island from the top will be awe-inspiring. Father Jerome is also known for building cathedrals and convents throughout The Bahamas, including on Long Island and New Providence. He died in 1956 and is said to be buried somewhere on the site of The Hermitage.

Illegal immigration: What exactly does a ‘secure’ border look like? – Longmont Daily Times-Call

U.S. and Cuba, in Breakthough, Will Resume Diplomatic Relations