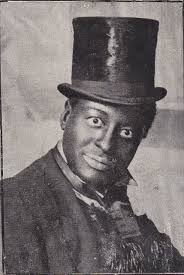 This famous comedian made history by becoming the first black American to take a lead role on the Broadway stage was born in the Bahamas and was one of the pre-eminent entertainers of the Vaudeville era. He became one of the most popular comedians for all audiences of his time and was by far the best-selling black recording artist before 1920. Williams was a key figure in the development of black entertainment and did much to push back racial barriers during his long career, even demeaning himself by donning a black face to get on stage. Williams died on March 4, 1922 in New York City.

Joseph Sandiford Atwell became the first black man after the Civil War to be ordained in the Episcopal Church.  He was born in Barbados and attended Codrington College before moving to the United States in 1863 to attend the Theological Seminary of the Protestant Episcopal Church in Philadelphia, PA.

He graduated in 1866 and moved to Kentucky where he was ordained a deacon by Bishop Smith. Rev. Atwell worked as a missionary worker in Kentucky and next went to Petersburg, VA, where he was ordained a priest in 1868 and became Rector of the St. Stephen’s Church and head of a parish school. He then went to Savannah, GA, in 1873 and was Rector of the St. Stephen’s Church before moving to New York in 1875. Rev. Atwell went on to become Rector at St. Phillips Protestant Episcopal Church on Mulberry Street in New York City. He died there of typhoid fever in 1881.

Jan Earnst Matzeliger, the inventor of a revolutionary shoe-making machine, was born in Suriname.

His father was a Dutch engineer and his mother was a black Surinamese slave. He settled in Philadelphia, Pennsylvania at 19 after working as a sailor and then moved to Massachusetts. In the early days of shoe making, shoes were made mainly by hand. For proper fit, the customer’s feet had to be duplicated in size and form by creating a stone or wooden mold called a “last” from which the shoes were sized and shaped. Since the greatest difficulty in shoe making was the actual assembly of the soles to the upper shoe, it required great skill to tack and sew the two components together. It was thought that such intricate work could only be done by skilled human hands. As a result, shoe lasters held great power over the shoe industry. They would hold work stoppages without regard for their fellow workers’ desires, resulting in long periods of unemployment for them.

After five years of work, Matzeliger obtained a patent for his invention, a machine that could produce between 150 to 700 pairs of shoes a day, cutting shoe prices across the nation in half. He died at age 36 on August 24, 1889. In recognition of his accomplishment, he was honored on a postage stamp on September 15, 1991.

Edward Wilmot Blyden, a major contributor to Black Nationalism, was born in Saint Thomas in the U.S. Virgin Islands to Free Black parents who claimed descent from the Igbo of the area of present-day Nigeria. In May 1850, Blyden went to the United States to enroll in Rutgers Theological College but was refused admission due to his race. Efforts to enroll him in two other theological colleges also failed. Blyden then migrated to Liberia, the colony set up in the 1830s by the American Colonization Society (ACS) in West Africa where he became deeply involved in its development. He also taught for five years in the British West Africa colony of Sierra Leone in the early 20th century. His writings on pan-Africanism were influential and Blyden later emigrated to Liberia in 1850, and made his career and life there. He married into a prominent family and soon started working as a journalist. He felt that Zionism was a model for what he called Ethiopianism, and that African Americans could return to Africa and redeem it. Later he supported Islam. He died in Sieera Leone on February 7, 1912.

John B. Russwurm was a Jamaican immigrant born in Port Antonio turned American abolitionist who founded the newspaper, Freedom’s Journal. He moved from the United States to govern the Maryland section of an African-American colony in Liberia, dying there in 1851. Russwurm was born to an English merchant father and an unknown black slave. Russwurm attended Hebron Academy in Maine, focusing on his studies to finish his education taught at an African-American school in Boston after graduation. In 1826, Russwurm became the first African American to graduate from Bowdoin College and third African American to graduate from an American college. Russwurm moved to New York City in 1827 and along with his co-editor, Samuel Cornish published the first edition of Freedom’s Journal, an abolitionist newspaper dedicated to opposition of slavery. Freedom’s Journal was the first newspaper in the United States to be owned, operated, published and edited by African Americans.

Upon becoming senior editor in September 1827, Russwurm used his position to change the paper’s initially negative stance on the colonialization of Africa by African Americans to a positive advocacy for this position. These strong views alienated many of the readers and ultimately resulted in Russwurm’s resignation in March 1829, after which he immigrated to Liberia.  He died there in 1851.

William Stanley Beaumont Braithwaite was the son of an immigrant from British Guiana and went on to publish his first book, Lyrics of Life and Love, in 1913.

The annual collection of poetry for which he is best known, Anthology of Magazine Verse and Yearbook of American Poetry appeared between 1913 and 1939 and also showcased the work of many authors, including Countee Cullen, James Weldon Johnson, Langston Hughes, Robert Frost, and Amy Lowell.

Braithwaite was awarded in 1918, in recognition of his contributions to literature, the National Association for the Advancement of Colored People awarded Braithwaite the organization’s highest honor. After retiring from teaching and moving to Harlem, New York, Braithwaite died in 1962.

Prince Hall was born in Barbados and in 1765, at the age of 17, worked for his passage on a ship to Boston where he became a leatherworker.  On March 6, 1775, Hall joined fourteen other free blacks of Boston who all became Masons at British Army Lodge, No. 58, then attached to one of General Thomas Gage’s regiments stationed in Boston.  Hall and the other newly initiated Masons were granted the authority to meet as a separate lodge, to march in parades, and to bury their dead.  They were not granted permission to confer degrees or perform any other Masonic work.   Nine years later on March 2, 1784, Hall petitioned the Grand Lodge of England, asking for a warrant for a Charter that they had been denied by the white Masons of Massachusetts. The warrant was approved and Hall established the first lodge of African American Masons in North America known as African Lodge No. 459.  He died in Boston on December 4, 1807.

Richard Howell Gleaves was a prominent mason and the Sixth National Grand Master of the Prince Hall National Grand Lodge of North America and Reconstruction-era politician in South Carolina. He was born free in Philadelphia to a Haitian father and an English mother. In 1866, Gleaves migrated to Beaufort, South Carolina and went into business with Robert Smalls. Gleaves purchased property in the town, including land on which was later constructed a black fraternal hall that is now known as the Sons of Beaufort Lodge, located at 607 West Street in Beaufort.

In 1872 and 1874, Gleaves was elected the 55th Lieutenant Governor of South Carolina to serve under Governors Franklin J. Moses, Jr. and Daniel H. Chamberlain In 1874, he defeated Martin Delany. He died in 1907.

Jean Baptiste Point du Sable is regarded as the first permanent resident of what became Chicago, Illinois and has become known as the “Founder of Chicago”. Little is known of his life prior to the 1770s expect he was born in Haiti. In 1779, he was living on the site of present-day Michigan City, Indiana, when he was arrested by the British military on suspicion of being an American sympathizer in the American Revolutionary War. In the early 1780s he worked for the British lieutenant-governor of Michilimackinac on an estate at what is now the city of St. Clair, Michigan, before moving to settle at the mouth of the Chicago River. He is first recorded living in Chicago in early 1790, having apparently become established sometime earlier. He sold his property in Chicago in 1800 and moved to St. Charles, Missouri, where he died on August 28, 1818.

In Chicago, a school, museum, harbor, park and bridge have been named, or renamed, in his honor; and the place where he settled at the mouth of the Chicago River in the 1780s is recognized as a National Historic Landmark, now located in Pioneer Court.

Alix Pasquet was a World War II fighter pilot and one of only five Haitian members of the Tuskegee Airmen. After his distinguished service in World War II, Pasquet returned to Haiti. But was was exiled in 1957 for supporting Louis Déjoie in the May 1957 Haitian Civil War. From his exile in Miami, Pasquet led a political movement to restore stability in his native country and overthrow then ruler François Duvalier. In 1958, he returned to Haiti with the intention of overpowering the capital’s army barracks and capturing the ammunition depot within. However the plot was foiled. Pasquet was killed during the attempted coup and buried in Port-au-Prince.