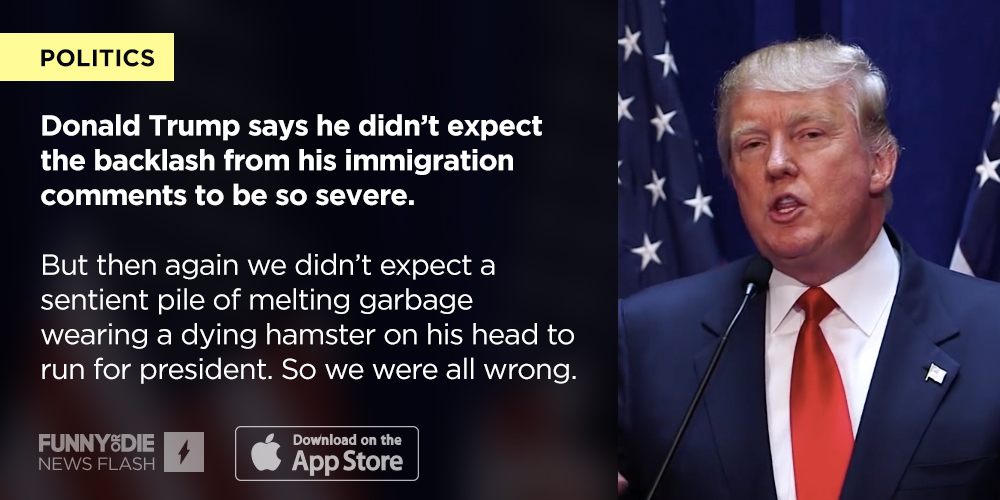 News Americas, NEW YORK, NY, Fri. Feb. 19, 2016: A wise person once coined the term “laughter is the best medicine” and it is indeed. While the serious issue of the GOP Presidential hopefuls’ tough and at times xenophobic stance on immigration, immigrant, Muslims and immigration reform is no laughing matter, many on social media including top comedians are having the time of their lives poking fun at the ridiculousness of the garbage being spewed by the likes of the GOP frontrunner, Donald Trump. Here are 15 hilarious jokes on the topics that also show why immigrant voters must get out and vote to ensure the GOP Presidential hopeful Clown-in-Chief makes it only to the gated estates of Loose-Ville!

1: George Lopez: “You know all of Donald Trump’s wives have come from other countries as immigrants. That just shows you that women are still coming to this country to do the jobs that Americans don’t wanna do.”

2: Stephen Colbert: “A border wall could not be simpler. Just build a 95 story building and knock it over 10,000 times. Then you keep the Mexicans out with a doorman.”

3: From Growing Up Mexican: “I bet my friend that if Donald Trump became President I’d give him $1,000. Joke’s on him since if Trump wins I won’t be in this country anymore!”

4: Conan O’Brien: “Donald Trump’s television ad mistakenly shows footage from Morocco instead of Mexico. Trump insists it’s not a mistake, and he’s going to build a fence along the US-Moroccan border and make Morocco pay for it.”

6: Joel McHale: “Victor Espinoza … made history by being the first Latino jockey to win the Triple Crown. And he’ll make history again when he’s the first person President Donald Trump deports to Mexico.”

8: Jokes4us: Why are Muslims worried about Trumps immigration plans? Once you deport Juan you deport Jamal.
9: Jokes4us: El Chapo only escaped from prison to have a “talk” with Trump.
10: Jeanne Shaheen: “When you get tired and think you can’t knock on one more door think about a President Trump.”

12: Dispropaganda: All #Muslims are a danger to #US citizens, except the rich ones of course!”

13: Jeremy Alberts on Reddit: How’s Donald Trump going to get rid of all the Mexicans? Juan by Juan”

Remember; whether you need a laugh or not, laughter is good medicine and in this Presidential Election, one really has to laugh at the right wing crop to prevent yourself from crying over the psycho babble being spewed.

In California, immigration bill designed as the "anti-Arizona" – Chicago Tribune

An Immigration Plan That Works for Canada: More Immigrants Who Are Already … –...

Shooting to Kill Immigrants on the Mexican Border – CounterPunch