Home Latin America After weeks of violent protests, what is happening in Peru? 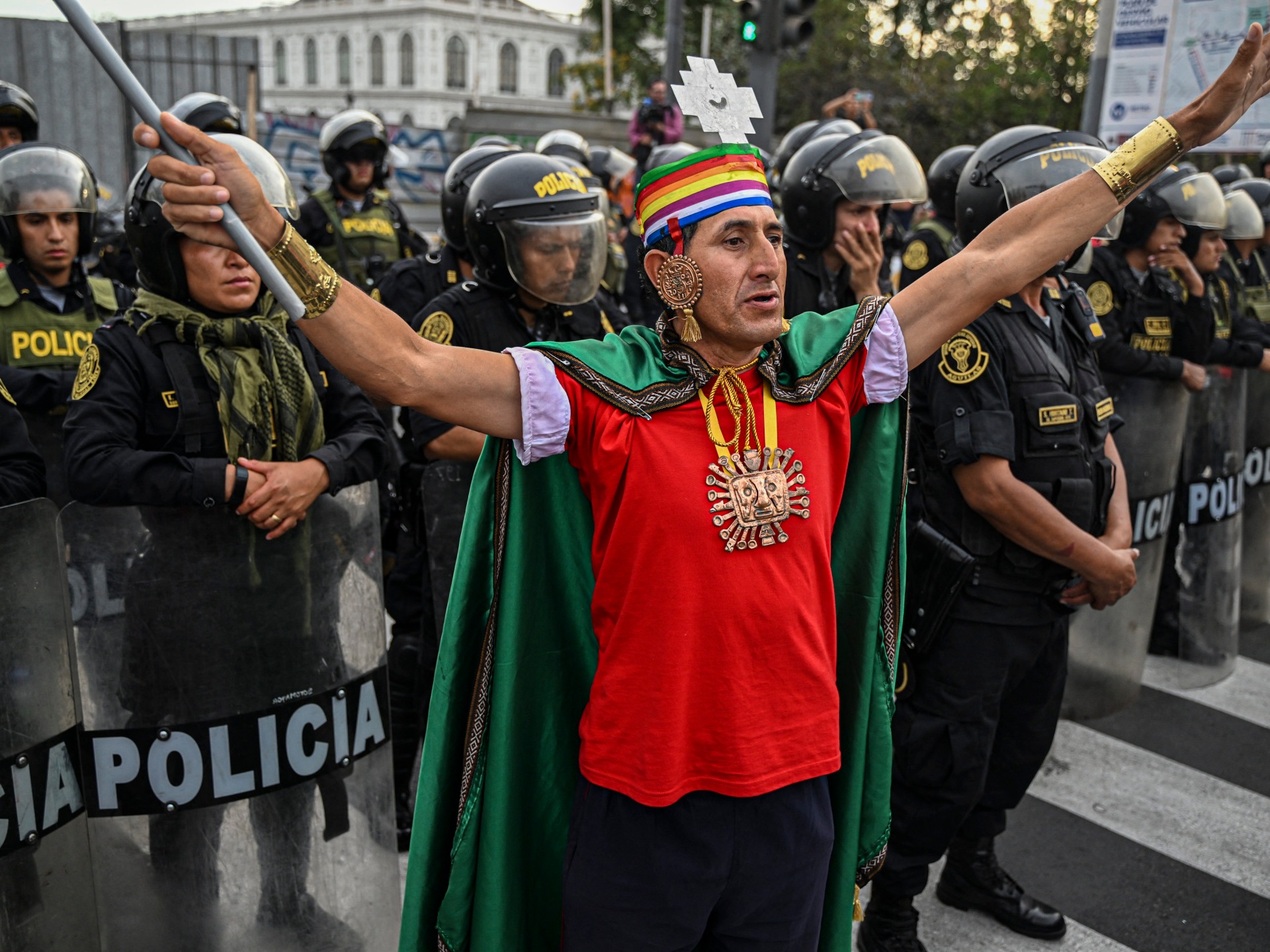 Thousands of protesters in Peru have converged in the capital Lima to show support for ousted former President Pedro Castillo and to demand the resignation of current President Dina Boluarte.

The mass demonstrations on Thursday aim to keep up the pressure against the government, with protesters also calling for the dissolution of parliament and fresh elections.

Counterprotests already under way are rejecting those demands, a sign of divisions wracking the country.

Here is what to know about the unrest:

What sparked the protests?

The country has been rocked by violent unrest since Congress removed Castillo and replaced him with his vice president, Boluarte, on December 7.

Castillo, 53, had been accused in multiple corruption investigations and narrowly avoided two impeachment attempts by Peru’s opposition-led legislature. Before the third impeachment effort on December 7, Castillo tried to dissolve Congress and rule by decree. The constitutional court called Castillo’s announcement a “coup d’etat”.

The legislature immediately voted to replace him in the latest blow in a years-long clash between Peru’s executive and legislature. Boluarte then ascended to the job as Peru’s sixth president in five years.

Castillo is being held in pre-trial detention while he is investigated on charges of rebellion.

What is fuelling the current protests?

Many of the protesters are Castillo supporters with a similar background to the former president. They are Indigenous and from rural Peru’s mountainous regions, and have argued that Boluarte doesn’t represent them.

Demonstrations began in the south and spread quickly in rural areas across the country.

In the five weeks of protests, 43 people have been killed in confrontations with security forces, according to Peru’s human rights ombudsman.

Protesters say that no dialogue is possible with a government that they say has unleashed so much violence against its citizens.

“We are from Chota in Cajamarca. We have come to Lima to defend our country, considering we are under a dictatorial government … which has stained our country with blood,” Yorbin Herrera, a protester from Cajamarca, told Al Jazeera.

As well as Boluarte’s resignation, the mass demonstrations in Lima will call for the dissolution of parliament and fresh elections.

“I am upset. Angry. Traumatised and shocked by what is happening here,” Luis Garro, another anti-government protester, told Al Jazeera.

“I believe that the people are going to force Dina Boluarte and the Congress out,” he added.

The protests that have engulfed much of Peru in the past month have largely been grassroots efforts without a clear leadership.

‘There is a long history of exclusion’

Experts say the worst political violence Peru has experienced in more than two decades has shined a spotlight on the deep divisions in the country that go back for years.

“The political situation in Peru has several layers … [and] if you look a bit further down into the social order of things … this can’t just be about one specific moment in 2023, or 2022,” Alonso Gurmendi, a lecturer in international relations at the University of Oxford, told Al Jazeera.

“There is a long history of exclusion of people from Indigenous descent, and Indigenous people in Peru have been left out of the economic growth [Peru has seen], where even if GPD is growing, and the macroeconomics numbers are doing well, every day people are left alone if they cannot privatise their basic needs,” he said.

“There is no good health care; there is no public housing, [and] public education is not well funded.

People say goodbye to demonstrators as they depart for Lima to protest against the government of Peruvian President Dina Boluarte in the city of Ilave, Puno, in southern Peru [File: Juan Carlos Cisneros / AFP]

What is the current government saying?

President Dina Bolouarte says she’s willing to talk to the demonstrators – but that they must gather peacefully.

“We know that they want to take Lima because of everything that is coming out on social media on the 18th and 19th [of January],” Boluarte said in a speech on Tuesday.

“I call them to take Lima, yes, but in peace, calmly; I’ll wait for you at the government house to be able to talk about the social agendas that you have because you well know that the political agenda that you are proposing is not feasible,” she added.

Boluarte has said she supports a plan to move up elections for president and Congress, originally scheduled for 2026, to 2024.

A “march for peace” supporting Boluarte was also under way in Lima on Thursday, with dozens of members from community groups and political parties wearing white T-shirts in rejection of the protests.

What happens next, and can the current president stay?

Analysts say it’s difficult to predict, but they don’t foresee better times for the country.

“It’s very difficult to say [what will happen],” Juan Claudio Lechin, a political analyst in Lima, said on Al Jazeera’s Inside Story.

“[But] if [Boluarte] has the guts to stay, she can stay because she has the army and the police, and she has the backup of approximately 80 percent of the population; the difference is that this part is not mobilised, whereas the other part, is being mobilised … with very aggressive actions,” he added.

Gurmendi said politicians in power have failed to see what is driving those demanding Boluarte’s resignation.

“The political establishment in Lima is unable or unwilling to understand the root cause of the protests,” Gurmendi said. “They seem to be convinced that this is just a ‘terrorist attack’ in the country with no legitimacy.

“So, unfortunately, I don’t see this playing out in any way that is peaceful, not at least for some time,” he said. “I actually think the country requires a longer process of a national discussion about how to change the system … so that it includes everyone.”

Mapping the battle for Bakhmut

Vincentians reminded of their role as Citizens