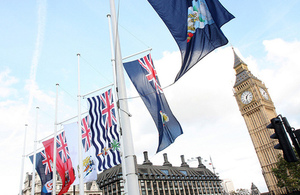 News Americas, LONDON, England, Tues. Dec. 16, 2014: A little over a week ago, Britain and its Overseas Territories held their annual Joint Ministerial Council in London.

The two day event on December 2 and 3 brought together British Ministers with the elected leaders of all of Britain’s Overseas Territories.

In recent years, the nature of such meetings has changed, so that today the exchanges equate to a relationship between equals, but reflecting interdependence within advanced constitutions that provide for uniquely local forms of self-government.

The group, which is disparate in size, development levels, and location, includes the five Caribbean Overseas Territories: Anguilla, The British Virgin Islands, the Cayman Islands, Montserrat and the Turks and Caicos Islands.

The seven page communiqué issued at the end of this year’s Council contained much that is unremarkable, covering issues of common interest. However, parts of the text reflect continuing and significant divisions with the Caribbean territories which, if not resolved on the basis of equity, may well come to place a growing strain on the relationship with London.

What is clear is that there is a dissonance between Britain’s desire to see its Overseas Territories comply with its norms, whether they relate to security, financial services or social issues, and the territories’ unusual and not well understood mix of god-fearing conservatism, self-confidence, and economic libertarianism.

There is also a growing sense that the UK with its huge deficit, migration problems, and subsidiary relationship to the EU, now has fewer lessons to teach those who live in the successful and relatively wealthy remnants of Empire in the Caribbean.

At its most obvious this can be seen in the conflict that is emerging between London at least two of the Caribbean Overseas territories and Bermuda.

In the communiqué there is a paragraph that reads: ‘We commit to continue to work together in raising international standards to tackle money laundering, tax evasion, illicit finance and corruption, leading by example given the importance of our financial centres to the international financial system. We agree to meet again ahead of the G20 meeting of Finance Ministers and Central Bank Governors in February to agree a way forward on implementation of the G20 principles on beneficial ownership.’

These were hard fought over words that hide a conflict of interest, and were the subject of disagreement and debate requiring the rewording of the draft communiqué.

In outline, the UK wants all of its Overseas Territories to establish an available central registry or a public register of the beneficial ownership of all legally registered companies and trust funds that are conducting business through their jurisdictions.

This has a particular relevance to the BVI, Cayman and Bermuda. They in part have based their hugely successful economic models, with the encouragement of successive British Governments, on attracting offshore financial business from around the world.

Their success reflects the fact that these Overseas Territories have genuinely facilitated economic globalization, enabling large and legitimate flows of capital around the world. However and controversially, it is also clear that more recently the use of their services has permitted global companies to engage quite legitimately in tax arbitrage to minimize the corporation tax they pay in any one jurisdiction, to the annoyance of Governments that are seeing their tax take diminish; while also allowing criminals or terrorists to hide behind the anonymity that offshore financial services provide.

Achieving a global agreement to end the secrecy of who is undertaking transactions through offshore jurisdictions has been regularly discussed by the G20, G8 and other groupings of economically powerful nations.

The problem is that if the UK has its way in its Overseas Territories without all other global offshore environments including those in the US, Europe and elsewhere doing so at the same time, this will result in quite legal business operations and the economies of some of the Caribbean Overseas Territories being severely damaged with negative political and social consequences.

This is therefore an issue on which Overseas Territories’ governments are prepared to take an unusually tough line.

Speaking on his return home from London, the Cayman Islands Premier, Alden McLaughlin said: “unless such registers become the new global standard and are being used by all major players –including the UK – then neither we nor any other Overseas Territory or Crown Dependency intend to go first and have our economies experimented with and potentially damaged”.

“I wish to advise the country that although on the last day of the [London meeting] there were attempts by the UK for the OTs to agree to introduce a central register of beneficial ownership and to work toward the possibility of making this public in the future. I am pleased to say that so far [the overseas territories] stand united on this issue,” he said.

His position, like that of the BVI and Bermuda, is that existing mechanisms for co-operation with Britain already meet the G20’s requirements for timely access to adequate, accurate and current information regarding beneficial ownership. He also suggested that a single data source would motivate individuals to hack into it for gain.

The issue has an importance that goes beyond the detail. In an editorial highly critical of Britain’s financial and moral failings, the publication, the Cayman Compass, reflected the view of most islanders asking: ‘Mother England: What can she be thinking?’

What seems to be happening is that global policy, driven by concern about tax arbitrage, tax evasion, organized crime, cyber criminality and financing for terrorism, has coincided with UK domestic lobbying by political parties, the media and NGOs which are promoting change without any serious consideration being given to the collateral damage or the long term consequences.

Overseas Territories worry most about their small size and limited resource base. They rely on tourism and financial services. Their economies are too small to diversify to absorb the fallout from major reductions in income from financial services.

Visit and it is clear that there is a growing sense among a younger generation of politicians and professionals that the future may have to be independence. They see the financial services issue and others including pending criminal prosecutions, aspects of security co-operation, the issuing of

passports from London, the control of the public sector, control of policing, and the role of British Governors who have to face both ways, as a challenge to what they believe and to their personal values.

How the UK decides to take these issues forwards in its Caribbean territories may therefore have the unintended consequence in the longer term of accelerating thinking about self-determination.

Immigration Reform 2013: This is the Biggest Immigration Issue You Haven’t … – PolicyMic