CaribPR Wire, PARIS, Tues. December 15, 2015: The growing need for vehicle emission control around the world was the subject of an address given at the COP21 Climate Change Conference in Paris by Donal Smith, the Founder and CEO of Bermuda Emissions Control, Ltd. (BECL), of Hamilton, Bermuda.

In presenting an overview of his Bermuda-based operation to delegates assembled at the ‘Wider Caribbean Pavilion’ in Paris, France on Friday, December 4, 2015, Smith said the small island of Bermuda had taken the lead in ensuring that vehicle emissions met strict quality control standards as a mandatory government requirement, since his company, BECL, began operating in 2009. “It took 20 years of painstaking research and development to open our first inspection plant but it was worth it,” he said.

Smith elaborated on the ways he was fulfilling his company’s commitment to help protect residents on Bermuda’s densely populated 22-square mile island from dangerous levels of carbon monoxide released into the fragile environment from vehicles licensed to operate on the public roadways.

He reminded the audience that Bermuda had achieved global relevance as an international financial centre which led the world in asset protection for ‘blue chip’ corporations. “Helping to protect the Island’s pristine environment has enhanced Bermuda’s appeal as a prominent offshore domicile of choice,” said the former Deputy Mayor of the City of Hamilton, Bermuda’s business Capital.

“The compulsory testing of vehicles on Bermudas roads contributes greatly towards ensuring a safer and cleaner quality of air and helps diminish the long-term impact of vehicular emissions, which research has identified as a significant cause of respiratory ailments which contribute to a high incidence of health concerns, such as asthma and bronchitis,” he added.

In concluding his remarks, Mr. Smith congratulated France on hosting the ‘COP21 Climate Change Conference,’ which resulted in 195 countries approving an historical draft agreement to address the world’s climate change challenges by the year 2020.

“I am so very pleased to see islands from the Caribbean region so well represented at the conference and I look forward to meeting them again to discuss the pressing need for Vehicle Emission Control at the COP22 conference next year in Morocco along with the many delegates from all parts of the world I have had the privilege of meeting in Paris,” he said. 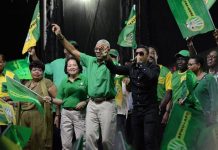 Latin America growth could slow if infrastructure challenges are not addressed – CAPA –...

Gold miner from Suriname gets acquitted of money laundering