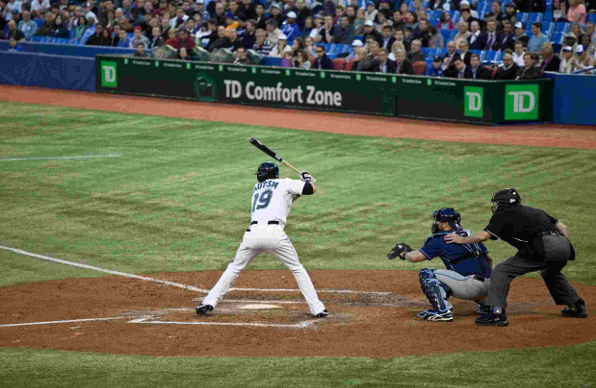 News Americas, NEW YORK, NY, Weds. July 15, 2020: Latin and South American countries have become famous in the world of baseball for producing some of the best players the game has ever seen. Whether it be the Dominican Republic, Venezuela or Mexico, there have been some incredible players out of these countries across the decades, and some are even all time greats.

The “Cuban Missile”, there is no way Chapman can be excluded from this list, simply due to the fact that he has a weapon for a left arm. The Cuban pitcher is known for the pace at which he throws, and is a complete nightmare for any batter looking to score.

Nobody can forget Bautista’s epic bat flip against the Texas Rangers, but that’s not all he is famous for. Bautista, who hales from the Dominican Republic, is one of the most well known Latin players in recent history.

Known for his strength and skill with a bat in hand, Bautista was the MLB home run leader in both 2010 and 2011, was the recipient of the Hank Aaron award on two occasions, and a 6 time All-Star, from 2010-15.

Dennis Martinez, or “El Presidente”, was the first Nicaraguan player to play in the MLB. the  pitcher held multiple records before calling time on his illustrious career in the late 90’s. His time at the Baltimore Orioles also earned him a spot in their Hall of Fame.

Across his career, Martinez was a 4-time All Star, he pitched 220 or innings in a season 9 times, he was the oldest player in the majors 3 times, he set the record for the most wins by a Latin-American pitcher, and he also pitched the 13th perfect game in baseball history.

Another star out of the Dominican Republic, Nelson Cruz currently plays for the Minnesota Twins, and has also played for the Milwaukee Brewers, Texas Rangers, Baltimore Orioles, and the Seattle Mariners.

He is a 6 time All-Star, a member of the All MLB First Team in 2019, in 2011 he was named the Most Valuable Player in the American League Championship Series, he was the AL home run leader in 2014, and even though he was banned from play for 50 games due to the Biogenesis Baseball scandal, he bounced back, and is still one of the best Latin American players to play the game.

What can be said about Miguel Cabrera that hasn’t been said before? The Venezuelan has been a beast with the bat in hand for almost all of his professional career, and he has the records to back it all up.

Even though he had his controversy, it would be difficult to not add Sammy Sosa to this list. Another Dominican star, Sosa’s career spanned 19 seasons, playing majority of them with the Cubs.

He reached many milestones throughout his career, namely, being a 7 time All Star, he also hit his 400th home run in his 1,354th game, reaching this milestone quicker than any other player in league history. He was also the 5th player in MLB history to reach 600 home runs. He was not indicted into the Hall of Fame, even though it was later decided that the drug tests that implicated him back in the early 2000’s, were inconclusive and unreliable.

Ramirez is a Dominican batter that dominated with a bat in hand. At times, he was unstoppable, and is regarded as one of the best batters in MLB history. Much like the other players on this list, he has the records to back that claim up.

A two time World Series winner, Ramirez was also a 12 time All Star, was the recipient of the Silver Slugger award 9 times, and won the Hank Aaron award twice. He is also one of 27 players to hit 500 career home runs, his 21 grand slams make him third all-time, and his 29 postseason home runs are the highest in MLB history.

This list wouldn’t be complete without the man that put Latin American baseball on the map. Roberto Clemente was not only the first Latin player to be inducted into the Hall of Fame, but also the first Caribbean player.

The Puerto Rican had an incredible career, which saw him win the Golden Glove 12 times, he was a 15 time All-Star, a 4 time NL Batting Champion, and a 2 time World Series winner. His untimely death shocked the baseball world, and the Pittsburgh Pirates, the team he spent his whole career with, retired his #21 jersey.

There are still a number of players that could have made this list, but these are without doubt the best Latin American players to step onto a pitch in the Majors. Their careers and records will be incredibly hard to match, let alone beat.

The Guest At Jamaica House

Apprehension and Apathy Compete With Excitement in Brazil