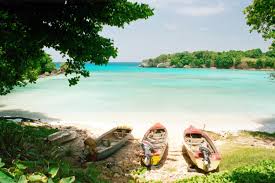 It is practiced by ministers, elected officials and activists in ways that often seem tribal in their intensity, and in ways that sometimes shocks outsiders.

In considering why Jamaica has been so successful in developing tourism, it ought to be better recognized that while no politician ever sets aside their party allegiance or philosophy, tourism has benefitted from a true sense of national interest, continuity and commitment by successive tourism ministers, who have largely put the industry and its development above Party for the common good.

Neither Minister McNeill nor former Minister Bartlett as astute politicians may feel wholly comfortable with this description. However, nothing says more about why Jamaica is succeeding in an industry that requires confidence, continuity and a long-term national commitment, than a photograph that appeared recently in the Gleaner.

It was taken in July at the symbolic groundbreaking of the new Courtyard Marriott Hotel in New Kingston. Not only did it show Dr Wykeham McNeill, the Tourism and Entertainment Minister, performing the ceremony, but there beaming in the center of the picture were Edmund Bartlett and the Leader of the Opposition and constituency MP, Andrew Holness.

What is perhaps remarkable by Caribbean standards, is that over the last few years, both before and after the last election, Jamaica, despite its once dire economic situation, has been able to transcend its image and has developed a now hugely positive brand that has enabled it to attract new investment and reach the landmark figure of 2 million visitors in 2013.

The extent to which this has happened also says much about the continuity provided by key figures in the tourist board and the industry who, despite sometimes different political affiliations, continued in post.

With the island’s IMF program succeeding beyond what many within thought possible, and a sense that Jamaica is now a ‘hot’ destination particularly for young professionals, the new challenge will be to develop programs that diversify the industry’s offering.

A few weeks back, Nicola Madden Greig, the President of the JHTA, made an interesting speech to the Jamaica Employer’s Federation, in which she pointed out that tourism was essential to Jamaica’s economy as a catalyst for growth.

In a speech that warrants a full reading, she made clear that Jamaica is now at the point where it needs to go beyond sun, sea and sand and embrace the fact that there is a new generation of potential visitors interested in sports, educational tourism, nature and culture, travelling for both work and pleasure and are seeking experiences.

These are the so called ‘millenials,’ born between the 1980s and 2000s who, for the most part, have knowledge-based or creative occupations, are now professionally established, and who are predicted to surpass the spending power of the post second world war baby boomers. To attract them would require new approaches.

What made her presentation particularly interesting in this respect, was its focus on two aspects of Jamaica’s tourism potential that are either overlooked or might be seen as counterintuitive based on sometimes negative images of Jamaica.

She suggested that much more should be done to relate tourism to Jamaica’s rural areas. Tourism there, she argued, can bring a real sense of pride and identity, and showcase traditions and distinct ways of life, history and culture.

Ms. Madden Greig also spoke about city tourism, a category that is now experiencing major growth worldwide in relation to nightlife, culture, music, art, and sports. Such visitors to Kingston, she suggested, might open up the city as the gateway to the different experience of being in Port Antonio, St Thomas and the south coast.

Her broader point is clear. All involved in tourism’s future success must begin to plan in a non-partisan way for tourism’s benefits to be able to reach all of the people.

Has His Love of Bolivia’s Street Dogs Gone Too Far?