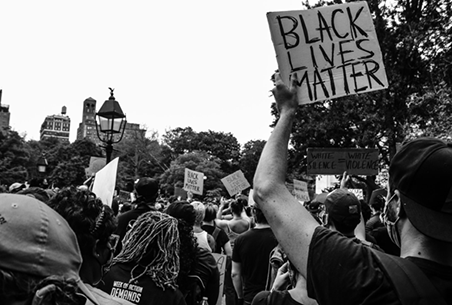 News Americas, NEW YORK, NY, Sun. April 18, 2021: It is sad to see that in these modern times, where humans are so developed, the problem of racism still exists. People are constantly humiliated because of the color of their skin, this directly impacts black people, but Latin Americans are no exception. 2020 is a year that will be remembered for one of the biggest things that marked 2020 which was the start of the Black Lives Matter movement.

The brutal murder of George Floyd at the hands of a Minneapolis police officer got the attention of the whole world and instantly triggered nation to create the black lives matter movement and support people of color. Many students from colleges all around the world had written essays about the “Black Lives Matter Movement” as a way to spread the word while others have taken over the streets as protesters, and they had to face many obstacles so their voices can be heard. The Movement had a huge impact on the Hispanic community also and gave them a great model that they should follow.

Since the founding of America, Latinos and African-American communities have experienced the same harm caused by an unjust system. Dealing with the same rising burden of discrimination, anti-immigrant sentiments, and hate crimes made the Latinos join the Black Lives Matter movement. Students of color often find themselves frustrated and left out at their university or school. During their education, they don’t learn anything about their heritage and culture as they study mostly the history of the United States and write essays on civil war ignoring the role of the Latin American community in US history.

Latinos also want people to understand that systemic racism in education, wealth, and housing affects them also. Although the biggest reason why Latinos joined the Black Lives Matter movement is that not only black people are murdered by police, but also Latino Americans are dying too. Growing up, the Latino Americans were taught to stay quiet. Many even don’t understand civil rights fully because they are always pushed aside when it comes to their education. Until the Black Lives Matter movement, they didn’t know that there is a way to fight oppression.

Another thing that made Latinos stand in solidarity with the Black Lives Matter movement is the fact that nearly 25 percent of Latinos are mixed and identify themselves as Afro-Latinos. So, for them, “Achieving the movement” would be working together to change the whole system of violence and criminalization against people of color. After the Black Lives Matter movement, schools started to look differently, which was helping the Latin American Students as much as it helped the Black students. Even the National Education Association, which is one of the biggest teachers’ unions, got involved and encouraged its members to participate in Black Lives Matter activities. The activities didn’t include just lesson plans, but also, they implemented restorative justice practices, hiring more teachers of color, and maintaining the Black and Hispanic history in the classrooms, which was really helpful to the students because they could learn everything about their culture during classes, instead of taking courses aside from school.

Although the lessons were not mandatory and it was left to the teachers to decide whether they want to participate or not, a survey shows that more than 81 percent of educators took a step ahead and supported the Movement. Many school districts planed a specific curriculum on Black Lives Matter. Other schools are focusing on creating Black History Month programs. Some even implement Black History in American history. That said, we can surely say that Black Lives Matter protected students of color. Offering them the same chances of success as the white students, respecting them and their culture more, and just making them feel accepted.

Bolivia’s Cordillera Real: An uncrowded alternative to the Inca Trail

JetBlue Is Worth $9.10 On Its Low-Cost Advantage & High-Value Geographies – Forbes

Please Support The People Of Saint Vincent & The Grenadines!
Invest Caribbean and The Ritzury Group are currently supporting a disaster relief effort for St. Vincent and The Grenadines during the eruption of the ‘La Soufrière' volcano.
Private Donations
Corporate Donations

Please Support The People Of Saint Vincent & The Grenadines!
Invest Caribbean and The Ritzury Group are currently supporting a disaster relief effort for St. Vincent and The Grenadines during the eruption of the ‘La Soufrière' volcano.
Private Donations
Corporate Donations
MORE STORIES

Caribbean Governments Urged To Stand Up Against Unethical Tech Platforms