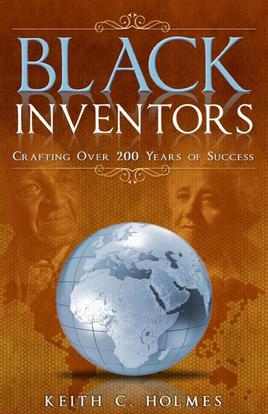 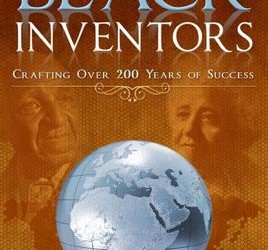 Black Inventors, Crafting Over 200 Years of Success, is a groundbreaking book that highlights the inventions by people of African descent globally. Written by Keith C. Holmes, an American who painstakingly spent over twenty years researching and gathering information on thousands of inventions by Black people from the years 1769 to 2007, the book is an inspiring must read for Africans at home and in the Diaspora if only to engender self confidence in African peoples necessary to reclaim the 21st century, especially in the crucial areas of science and technology.

On the cover are pictures of George Washington Carver and Marjorie Stewart Joyner with a globe signifying not only the global presence of African peoples but the contributions responsible for world progress in technology. Carver, though born in slavery, is one of the world’s prolific inventors and became the first and greatest agricultural chemist who single handedly saved Southern USA from environmental waste by developing hundreds of products from peanuts, sweet potatoes and other plants. He was the first to introduce the practice of crop rotation and planting of legumes to enrich soils and his expertise was sought by many governments including even the Soviet Union under Stalin.

Starting with the contributions from ancient black Africans who resided in Egypt and Mesopotamia where inventions and innovations in mining, agriculture, writing, architecture, animal husbandry, tool making, beverages, textiles, food processing, medicine, religion, social organization, speech and material sciences which contributions laid the foundations of today’s science and technology. This short chapter on ancient contributions left me hungry for more as the author had very little narrative. This section would have been enriched had the author included more materials including impressive scientific traditions outlined in books such as ‘Blacks in Science’ edited by the veritable scholar Ivan van Sertima, Cheikh Anta Diop’s ‘Civilisation or Barbarism’ and Hunter Havelin Adams’ ‘African and African-American Contributions to Science and Technology.’

However, one remarkable aspect about Mr. Holmes’ book that sets it apart from previous books on Black inventors is its comprehensive global coverage. Outlined in this book are black inventors from diverse places such as Russia, Australia, Canada, Central America and the Caribbean, practically all European and African countries as well as all the fifty states of the United States.

Ghanaian Kofi Afolabi A. Makinwa, Holmes informs us, pioneered in inventions in computers with over 50 domestic and foreign patents mostly assigned to U. S. Phillips while Samuel Ayodele Sangokoya has over 50 chemical processes patents assigned to Albamarle Corporation. Tisafaye Shifferaw is an Ethiopian inventor of exercise equipment.

Prolific black inventors in Europe covered in the book include Dr. Fisseha Merkuria from Sweden who is a co-inventor with some 20 patents in cell phone technology; Olukayode Anthony Ojo of The Netherlands, a co-inventor with some 38 patents and Dereck A Adeyemi Palmer, Jacob Kwaku Boateng, Kunle Onabolu and Paul Kaine from the United Kingdom while France, Germany, Italy and Russia and other countries registered a number of black inventors.

In Australia, David Unaipon, an indigenous scientist and statesman has several inventions and his face appears on the Australian 50 Dollar note.

Zambian patent holders listed in this book are Patrick Chilufya Chimfwembe, a Canadian based co-inventor with some 16 patents in communication technologies and Mulenga Lukwesa Nyamugaba, who patented an AIDS medication, Tisaniferon.

The book also outlines design patents, trademarks and sports trademarks and the innovators in the video game and film industry such as Todd Quincy Jefferson and trademarks of media, sport and music legends such as James Brown, Bob Marley, Jimi Hendrix, Oprah Winfrey, Michael Jordan and Whitney Houston among others.

Since black inventors will never cease to be born, Black Inventors cannot be exhaustive in its coverage. It is remarkable to note that Mr. Holmes has continued working on such projects and is currently working a book that will explain the impact of the works of black inventors globally. Cases to point out include Cyprian Emeka Uzoh, now a prolific inventor who has over 170 patents and was voted US inventor of the year in 2006. Jesse Eugene Russell is a technology thought leader with some 75 patents and is at the core of wireless communication technology.

Dr. Sandra Baylor Johnson is a distinguished inventor and a former IBM employee and has over 40 US patents. An electrical engineer, she worked among other projects on parallel computing projects and on the IBM’s Deep Blue chess playing machine.

The first European based scientist to win the US based Society of Manufacturing Engineers Total Excellence Award, in 2006, is the Nigerian proven leader and innovator in electronics manufacturing. Prof. Ndy Ekere is an electric and electronic engineer and head of the Electronics Manufacturing Research Group at the University of Greenwich in UK.

Dr. Ernest Simo, a Cameroonian, pioneered in developing some leading information communication technologies in the world today. These are the Very Small Aperture Terminal (VSATs) he developed together with Hughes Network Systems of USA in 1983, the Low Earth Orbiting (LEOs) and Personal Communications Services. He also pioneered in the Code Division Multiple Access technology used in cell phones in all of Americas and Asia and competes with GMS used in Europe and Africa and is now working on third generation wireless systems.

The African continent has recently pioneered in groundbreaking innovations and inventions. These contributions will increase and put Africans at the centre of technology as it was in the beginning. The philosophical underpinning towards this shift is a result of the formulation by an African, Dr. Gabriel Oyibo, in 1999, of the Theory of Everything or, as he calls it, the God Almighty’s Grand Unified Theorem (GAGUT).

By formulating GAGUT, the Holy Grail of mathematical physics long sought by eminent physicists and which Dr. Einstein tried hard to formulate but could not, Oyibo, an African mathematical physicist and inventor, has arguably eclipsed the famous Dr. Albert Einstein as the greatest physicist ever. GAGUT is the all encompassing theorem which serves to explain the origin of the Universe and unites all known forces – Newton’s gravitational, Maxwell’s electromagnetic, Einstein’s relativistic and the Ying and Mills strong and weak forces – and any other forces ever to be known by mankind are recoverable from the GAGUT equation: Gij, j = 0.

GAGUT is a revolutionary discovery in science. It fundamentally changes scientific thinking, just like Einstein’s E = mc2 fundamentally changed the scientific conception of matter and ushered in the atomic age. GAGUT brings science, ancient African belief as engraved on the Shabaka Stone in ancient Egypt and many religious beliefs including the Biblical story of creation together. GAGUT teaches us that there is only one true element, HYDROGEN in the Universe and GAGUT will open new technology frontiers.

GAGUT has started to elevate Africans to global prominence in the same way the Euro/Anglo-American/Jewish world dominated world affairs thanks to the discoveries of the Englishman Isaac Newton and the Jewish Scientist Albert Einstein.

In Kenya, there is fertile growth in ITC applications as well as in Ghana, Nigeria, Uganda, Senegal, South Africa and other countries and world-class Apps are being developed. Even space exploration endeavours are being pursued in a number of African countries.

Arthur Zang, a Cameroonian engineer invented a cardiopad, a medical tablet. The cardiopad enables heart examinations to be carried out remotely and is a first in African and global tele-medicine. Ivorian Yapi N’chor Didier was described as ‘a living god of IT’ by an American IT expert because of his revolutionary IT devices such as the Mystery Mouse 7, a smart multi-use mouse and what could ultimately help reduce piracy, the DVD Dead Cryptor.

A US based Zambian student Patrick Kwete developed medical software called ExpatCare and is useful in providing personalized medicine to take into account side effects and possible complications before administering medicine. Anthony Ng’oma, also from the USA was voted US black engineer of the year in 2013 and Distinguished Professor Clive Chirwa is inventor of a non woven impact resistance material (British patent GB 2355469) while Dr. Habatwa V Mweene has developed cheaper solar lights to mention but these out of many Zambians who are making contributions to world technology development.

In South Africa, Ludwick Marishane developed an anti-germicidal lotion which when applied on the skin allows one to be cleaned, that is, take a bath without water. Marishane’s DryBath with applications in long distance travel and military endeavors won him the 2011 Global Student Entrepreneur Award. An Ethiopian female scientist based in the US, Sossina Haile, is developer of a reactor that mimics plant life in making fuel from water and carbon dioxide in sunlight thus promising a renewable energy source. Togolese Dr. Victor Agbegnenou patented in 2004, the Polyvalent Wireless Communication System, a kind of fibre optics in the air and is a communication system that promises to narrow the digital divide and reduce the cost of high speed internet, telephony and television. We need not continue digging to lay expensive and obsolete optic fibres.

Bertil Nahum from Benin is developer of medical robots the Rosa and Brigit and was recently voted the world’s 4th most revolutionary high-tech entrepreneur after the three Americans, namely Steve Jobs, Mark Zuckerburg and David Cameron. In Congo DR, Therese Inza, an engineer and president of an association of female inventors in Congo DR developed a solar-powered humanoid Robocop that merges the role of human traffic officers and traffic lights to control traffic in Kinshasa and can also speak and report traffic offenders.

Verone Mankou is a Congolese engineer and entrepreneur who designed the first African iPad, the Way-C touchpad as well as the Elikia smart phone. Other ICT innovators in Africa include Saheed Adepoju of Encipher Limited responsible for developing the Inye-1 and 2 tablet computers. Dr. Ndubuisi Ekekwe holds a US patent on a micro-chip used in minimally evasive surgical robots and has other patents pending.

The list of African inventors is growing worldwide. The website www.kumatoo.com has an impressive list of African scientists and inventors and is continually being updated. This website also repeatedly plays advocacy to the need for African governments – and I dare add businesses and foundations – to support science and technology activities for us to improve the lives of our peoples.
Black Inventors, Crafting Over 200 Years of Success (2008, 179pp) is published by Global Black Inventor Research Projects, Inc. Brooklyn, NY, USA. Email: in**@gl*****************.com URL: www.globalblackinventor.com
Andrew Ose Phiri is an architect and author of African Scientific Legacy, Mwajionera, 2006. This book is downloadable at www.afrikrafts-zambia.com/Books/AfricanScientificLegacy.pdf