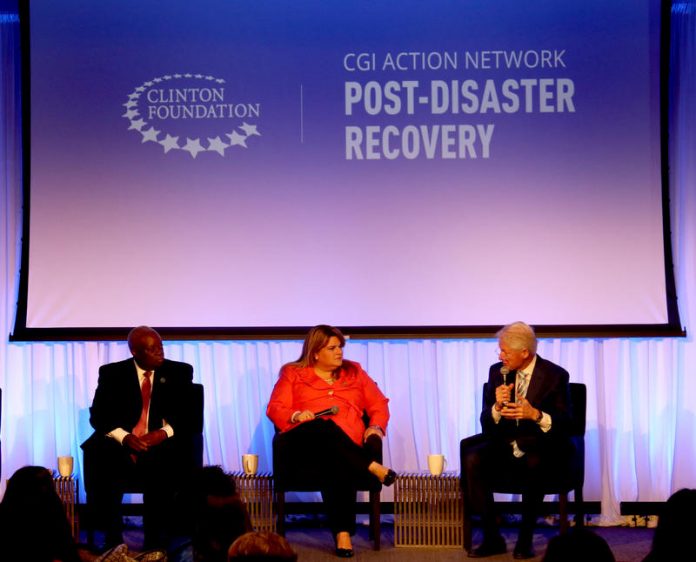 News Americas, MIAMI, FL, Weds. April 4, 2018: Can the Caribbean begin to lead the world after Hurricanes Irma and Maria?

Former US President Bill Clinton thinks it can happen on climate resiliency. His comments come as he formally launched his Clinton Global Initiative Post-Disaster Recovery Action Network for the Caribbean at the University of Miami Tuesday.

The initiative, coming just over six months after hurricanes battered many islands in the Caribbean, is aimed at bringing together leaders from across sectors like green energy, agriculture and health services, to confront future disasters and develop new, specific and measurable plans that will advance recovery and promote long-term resiliency.

“The [Caribbean] has many treasures,” Clinton said as he opened the UM event, “but it’s also one of the most vulnerable areas in the world to the ravages of climate change.”

Clinton also praised Dominica Prime Minister, Roosevelt Skerrit’s $600 million plan to make his hard-hit island the world’s first climate-resilient nation. The Government of the Commonwealth of Dominica has committed to work with its development partners to create and launch the Climate Resilience Agency of Dominica (CREAD), which will dedicate $600 million to new resiliency projects.

CREAD is an independent agency that will fund, design, procure, implement, and coordinate climate resilient projects with the objective of making Dominica the first climate resilient nation in the world. CREAD will feature an innovative financing incentive for private sector partners: for every $10 million pledged, Dominica will offer the right to use a total of 1 million tons of carbon sequestered by its rainforests and marine environments as a carbon offset over the course of 20 years. Through CREAD, Dominica will rebuild and repair major roads, rebuild approximately 20 schools and 27 health facilities, and provide support for 8,500 farmers across the island. Funds raised through the carbon offset program will be dedicated to the provision of 4,000 climate resilient homes for those most in need.

“If this can be done,” Clinton said, then the Caribbean can really begin to lead the world in a totally different direction.”

Following the devastating hurricanes that tore through the Caribbean region in September 2017, local leaders of Puerto Rico, the U.S. Virgin Islands, Dominica, and Antigua and Barbuda approached Clinton to help them build back better.

The Action Network formally launched with a day-long invitation only event on April 3rd and saw participation from more than 350 leaders, including high-level representatives like Skerrit and Governor Kenneth Mapp of the U.S. Virgin Islands. Participants announced eight Commitments to Action – solutions that are new, specific, and measurable – focusing on a wide range of issues, including training for 5,000 mental health workers in Puerto Rico; deploying nurses to the U.S. Virgin Islands to conduct vision, hearing, and dental screenings for 9,000 schoolchildren; a comprehensive reforestation and habitat program that will plant 750,000 trees; a new agency in Dominica providing funding for resiliency projects; and solarizing 12 primary health clinics in Puerto Rico.

The American Federation of Teachers has partnered with Airlink and the Community Foundation of the Virgin Islands to bring nurses to conduct vision, hearing, and dental screenings for all 9,000 schoolchildren on the U.S. Virgin Islands.

Afya Foundation has committed to addressing the urgent medical needs of the elder population in Puerto Rico, by shipping immediate medical supplies and equipment to Acción Social’s 22 Elder Care centers, while providing training and capacity building to Acción Social staff.

Para la Naturaleza (PLN) has committed to launch Habitat, a comprehensive reforestation and habitat restoration program in Puerto Rico that aims to plant 750,000 native and endemic trees that are more resilient to natural phenomena such as hurricanes, and provide assessment and maintenance of newly planted areas.

Americares has committed to address mental health challenges in Puerto Rico in the wake of Hurricane Maria by providing training for 5,000 health workers, emergency responders, and social service providers across the island.

International Medical Corps has committed to support primary healthcare for school-aged children in Puerto Rico by procuring an additional Mobile Medical unit for Med Centro, allowing them to reach an additional five elementary and middle schools with comprehensive preventive health screenings, and providing training and capacity building to all Med Centro staff.

Digicel has committed to repair or rebuild seven schools and 360 homes in Dominica that were damaged or destroyed by Hurricane Maria, while also training 100 community members in building techniques and provide community workshops on risk mitigation and disaster preparedness.

Clinton also announced a Commitment to Action in development, issuing a challenge to members of the Action Network to pre-position relief supplies for the upcoming hurricane season.

Dominica was battered by Hurricane Maria on September 18 while the U.S. Virgin Islands were battered by both Hurricanes Irma and Maria. The hurricanes across the Caribbean cost over $150 billion in damage last Fall. Some communities are still struggling to recover. In Puerto Rico, more than 150,000 are without power and many lack access to clean drinking water.

“If we do not address the fundamental issues contributing to climate change, we’re going to see a greater intensity of disasters like Hurricane Maria and Irma,” said PM Skerrit. “If the world continues to fail to address climate change, we must not only build back better, but we must improve the national resiliency of our islands. This meeting of the Clinton Foundation is helping to ensure that our efforts to become the first climate resilient nation in the world are system-wide, integrated and coordinated.”

One of the biggest challenges for recovery has been the lack of an emergency communications system as the next hurricane season quickly approaches.

The Great Escape in fading light at Harare – Cricket Country