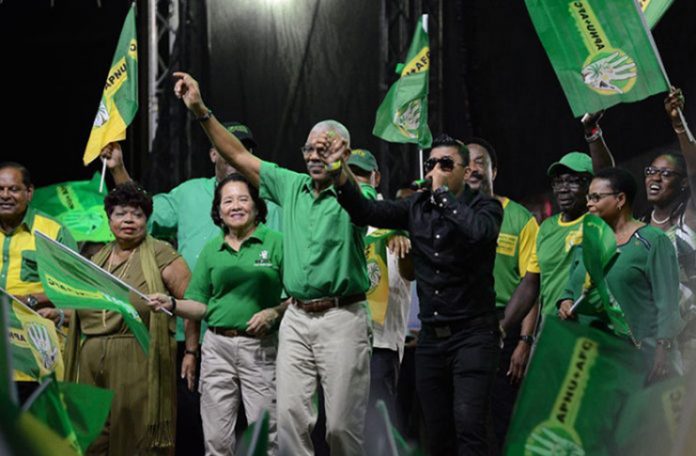 In a bid to win re-election, the ruling party, A Partnership for National Unity+ Alliance for Change (APNU+AFC), led by President David Granger, says it would distribute some of the country’s newfound oil wealth directly to citizens through cash transfers should it win re-election.

The poor South American country, which joined the ranks of oil producers in December when a consortium led by Exxon Mobil Corp began pumping crude in the offshore Stabroek block, is seen as a test case for whether oil riches can bring sustainable development in nations with weak institutions.

President David Granger’s APNU+AFC coalition has pledged not to use funds from oil sales until after the election, in which plans for how to use the windfall is a major issue. One possibility is direct payments to citizens, similar to the U.S. state of Alaska’s annual dividend from oil and gas revenues.

In a manifesto laying out its plans for a potential second five-year term, the coalition said it would approve cash transfers to citizens “for the purchase of essential items” as well as “conditional cash transfers” for single parents, public transit, and elder care, among other items.

“Guyana is about to start receiving significant revenue from our new oil and gas sector,” prime ministerial candidate Khemraj Ramjattan wrote in the manifesto. “We are going to use…the oil revenue to transform Guyana for the benefit of all Guyanese.”

The manifesto – which also pledged to diversify the economy, invest in infrastructure and crack down on corruption – did not indicate how much money citizens could expect to receive from the transfers. The government expects up to $300 million in oil revenues this year alone, said Finance Minister Winston Jordan.

The opposition People’s Progressive Party said in its platform, released last year, that it supported “targeted cash transfers” geared toward the elderly, children, and the poor. It also said it would use oil revenues to improve health care, reduce taxes, and save for future generations.

India vs West Indies highlights – the match as it happened – NDTV

Invest In Yourself To Improve Your Business