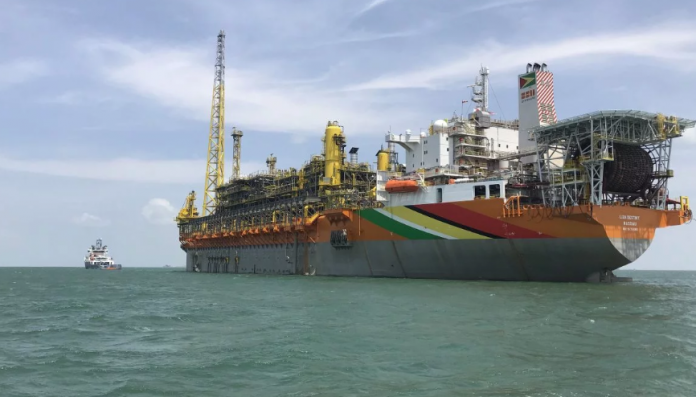 News Americas, LONDON, England, Weds. Feb. 26, 2020:   Two weeks ago, Trinidad’s Prime Minister, Dr Keith Rowley, delivered a major speech. It sought to define the future trajectory of his country’s energy policy. Speaking at the conference, ‘Shaping the Caribbean’s Energy Future,’ he indicated why over the next 10 years, the way the world thinks about the Caribbean may change.

Much of what was reported focused on Trinidad no longer being able to jointly develop with Venezuela its cross-border oil and gas fields because of US sanctions. However, of greater long-term significance were the views expressed on the region’s economic future as a producer of oil and gas, and the central regional energy-related role Dr Rowley envisages for Trinidad.

Recent oil and gas finds, particularly in Guyana, he noted, were radically changing the perception of the region. “With justification the Caribbean is “being heralded as the next major oil and gas province”. This had generated unprecedented interest from the world’s largest oil companies, auguring well for capital and technology transfer to the region, he said.

Trinidad hoped to benefit from much of the exploration activity now taking place across the Caribbean. It was poised to participate in the exploitation of hydrocarbon off the Guyana’s and “assist the new entrants Guyana, Grenada, Barbados, Jamaica and the Bahamas” in the development of their petroleum sectors, he observed.

To this end, he revealed that Trinidad had entered into Memoranda of Co-operation with Guyana, Grenada and Barbados for the provision of technical assistance. He also said that preliminary discussions had begun on the development of unitization agreements with Grenada and Barbados to support the exploitation of reservoirs that cross their maritime borders into Trinidad’s economic zone.

Dr Rowley made clear that because of its geographic location and facilities, Trinidad hoped to provide logistical and offshore support, and would expand its marine infrastructure by considering expanding its Galeota Port development to meet demand from the Guyana’s and elsewhere in the region. The issue driving this strategic reassessment was a decision to withdraw from an agreement with Venezuela to develop the Loran-Manatee natural gas field which straddles the two country’s maritime borders.

In the face of US sanctions, the two countries “with regret” had agreed to independently develop the field. This, he said, also had implications for plans for developing other cross-border natural gas reserves with Venezuela.

Dr Rowley’s remarks represent an attempt to establish Trinidad’s regional pre-eminence in the oil and gas sector by positioning it to capitalize on the further development of its own reserves and those of neighbors if they discover oil or gas in exploitable quantities. They also illustrate Trinidad’s interest in retaining a pivotal regional role as over time its own energy and economic possibilities diminish.

Why these developments are worth describing at length is because they demonstrate how oil and gas finds are set to change the region.

The Caribbean has tended to be characterized as consisting of small fragmented economies driven by tourism, offshore financial services, commodity-based agriculture, with limited opportunities for mineral extraction. However, this is changing rapidly.

In recent months, there has been a surge in coverage in the international media, indicating that the region is about to become of global significance as a Western Hemisphere source of hydrocarbons and as an important strategic partner.

Unfortunately, much of what has been written in the region and beyond about this and the potential for new-found wealth obscures a more important but lacking Caribbean debate about where further finds will lead and what the implications might be.

Most analysis misses the point that while oil can bring extraordinary public wealth, especially to small nations, it must bring real and lasting benefits to the citizens of the country that owns what is a finite resource. That is to say, not just monetary reward in the form of lower taxes, but through the much-improved provision of education, health care, pensions and social support.

It also fails to consider in practical detail the ways in which future energy dividends can be made to last far into the future through independent sovereign wealth funds with robust oversight, and the development of skills locally to ensure the region develops in own cadre of energy

industry professionals and at every level.

A debate is needed too about whether oil and gas when discovered should be monetized or utilized in the region or should be exported for refining elsewhere. Much of the Caribbean has sound environmental and tourism reasons not to want onshore, polluting, high carbon emitting refining or downstream industries.

The political and strategic implications also require careful exploration. Dr Rowley’s remarks come as Venezuela and the US continue to vie for energy influence in the region. Venezuela has said that it intends reviving its PetroCaribe preferential oil program in the first half of this year this year while the US is increasing its pressure on Caribbean nations, making clear at recent meetings that it will not work on energy or other issues with nations that support Maduro government.

There are also matters that touch on regional integration and the cross-border movement of capital.

Where oil and gas are discovered, infrastructural and other investments follow. In the case of Guyana, Jamaica’s fast-growing NCB Financial Group is to move into financing oil related facilities in Guyana. The country’s impending oil wealth is considered likely to trigger other long-considered investments relating to port development, road infrastructure, and closer links to Brazil. Similar considerations will arise if as expected, gas is found in recoverable qualities off the Dominican Republic and Haiti.

Hydrocarbon finds invariably bring challenges relating to security and corruption. They also raise questions about the industry’s environmental soundness and compatibility with industries such as tourism and fisheries, make clear the need for sound legal and regulatory frameworks, requiring civil society and the media to closely scrutinize the detail.

It quite possible to imagine, a decade from now, as many as ten Caribbean nations becoming energy rich net exporters of Caribbean oil and gas, with problems associated with wealth that hardly anybody in the region or beyond has previously given much thought to.

If this happens, it implies a migration in the Caribbean’s economic and political centers of gravity, the end of mendacity and a significant change in the nature of the region’s discourse internationally. This warrants greater debate within the region.

EDITOR’S NOTE: David Jessop is a consultant to the Caribbean Council and can be contacted at [email protected] Previous columns can be found at www.caribbean-council.org

Opinion: A Refugee Crisis, Not an Immigration Crisis