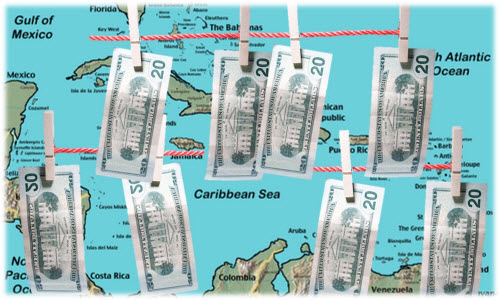 In Antigua & Barbuda, the US says money laundered through the purchase of real estate, vehicles, vessels, and jewelry, as well as through a variety of businesses. Money also has been laundered throughwire transfers and the co-mingling of illicit funds through front operations, the US report stated.

The US says money laundering is primarily related to proceeds from illegal narcotics trafficked by criminal organizations and occurs through real estate purchases and international tax shelters in Aruba.

The US says the primary sources of illicit funds in The Bahamas are trafficking in narcotics and weapons and human smuggling. The report claims criminal organizations take advantage of the cash-based economy to launder money through the purchase of property, businesses created for money laundering purposes, and gaming.

Barbados’ susceptibility to money laundering is primarily associated with the domestic sale of illegal narcotics and the laundering of foreign criminal proceeds, the US report said. In addition to the use of financial institutions, money is laundered through a variety of businesses and through the purchase of real estate, vehicles, vessels, and jewelry, the report added.

The US says Belize is vulnerable to money laundering due to the lack of enforcement of its laws and regulations, strong bank secrecy protections, geographic location, and weak investigatory and prosecutorial capacity. The sources of money laundering are drug trafficking, tax evasion, securities fraud, and conventional structuring schemes, the State Department report said.

Criminal proceeds laundered in the BVI derive primarily from domestic criminal activity and narcotics trafficking, the report from the State Department said, adding significant money laundering risks include exploitation of offshore financial services, a unique share structure that does not require a statement of authorized capital, and lack of mandatory ownership information filing.

The US claims that the Cayman Islands’ indirect tax regime and its susceptibility to money laundering is primarily due to foreign criminal activity and may involve fraud, tax evasion, or drug trafficking. It says the island’s offshore sector may be used to layer or place funds directly into the Cayman Islands’ financial system.

The US admits that risk of money laundering is low in Cuba, but claims the island has a number of strategic deficiencies including weak supervision and enforcement of its Designated Non-Financial Business or Profession and non-profit sectors, which hampers efforts to monitor the effectiveness and progress of Cuba’s AML efforts.

In Curacao, the US report says money laundering occurs through real estate purchases and international tax shelters, and through wire transfers and cash transport among Curacao, the Netherlands, and other Dutch Caribbean islands. The report added that domestic public corruption poses a money laundering threat to Curacao.

The US charges that financial institutions in the DR engage in currency transactions involving international narcotics trafficking proceeds that include significant amounts of U.S. currency or currency derived from illegal drug sales in the United States.

The US report also claims that corruption within the DR government and the private sector, the presence of international illicit trafficking cartels, a large informal economy, and weak financial controls make the DR vulnerable to money laundering threats.

Narcotics trafficking and government corruption are the primary sources of laundered funds in Guyana according to the US. But the report added that other illicit activities, such as human trafficking, illicit gold mining, contraband, and tax evasion, are also sources.

Common money laundering typologies, according to the State Department, include: fake agreements of sale for precious minerals used to support large cash deposits at financial institutions; cross-border transport of volumes of precious metals small enough to avoid scrutiny by relevant officials and the payment of the relevant taxes and duties; and using middle-aged and elderly couriers for cross-border transport of large sums of U.S. dollars.

The US State Department says most of the identified money laundering schemes in Haiti involve significant amounts of U.S. currency held in financial institutions outside of Haiti or non-financial entities in Haiti, such as restaurants and other small businesses. Illicit proceeds are also generated from corruption, embezzlement of government funds, smuggling, counterfeiting, kidnappings for ransom, illegal emigration and associated activities, and tax fraud, the report added.

Money laundering in Jamaica is primarily related to proceeds from illegal narcotics and weapons trafficking, financial fraud schemes, corruption, and extortion. It is largely perpetrated by organized criminal groups, the US report says. The report added that a large number of financial crimes related to cyber-crime, including lottery-related financial fraud schemes, target U.S. citizens and are largely perpetrated by the dozens of violent, organized criminal groups on the island.

In Sint Maarten, money laundering of criminal profits occurs through business investments and international tax shelters, the US claims, while adding that the government sector continues to be vulnerable to integrity-related crimes.

18: Saint Vincent and the Grenadines

The US says money laundering in Saint Vincent and the Grenadines is principally affiliated with drug production and trafficking as well as arms and ammunition exchanges for drugs and financial institutions, including domestic and offshore banks and money remitters, are susceptible to money laundering.

Money laundering in Suriname is closely linked with transnational criminal activity related to the transshipment of cocaine, primarily to Europe and Africa, the US claims.  The report also claims that public corruption also contributes to money laundering but admits that the full extent of its influence is unknown. US authorities, citing local media reports, also claim that domestic and international drug trafficking organizations are believed to control most of the laundered proceeds, which are primarily invested locally in casinos, real estate, foreign exchange companies, car dealerships, and the construction sector.

Proceeds from drug trafficking, illegal arms sales, gaming, fraud, tax evasion, and public corruption are the most common sources of laundered funds in the twin-island Republic of Trinidad & Tobago the US says. The State Department report added that narcotics trafficking organizations and organized crime groups, operating locally and internationally, control the majority of illicit proceeds moving through the country. The US also claims that money laundering also occurs outside the traditional financial system in the country and that while public casinos and online gaming are illegal in Trinidad and Tobago, gamers take advantage of “private members’ clubs,” which operate as casinos and move large amounts of cash.