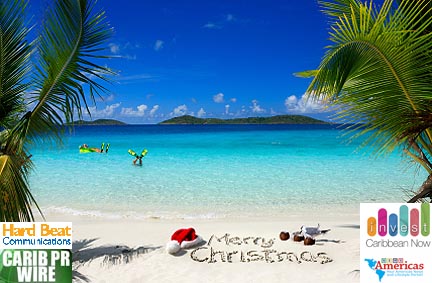 News Americas, NEW YORK, NY, Weds. Dec. 21, 2016: There is nothing like Christmas in the Caribbean. First off there’s sun, warm wind and sea and sand but most of all people put more emphasis on the festival, beginning early on in December with cleaning and preparation as well as the endless parties and of course shopping for all the various Caribbean delicacies and drinks that make Christmas in the Caribbean, incomparable. Here are some unique Christmas traditions from islands across the region:

St. Lucians celebrate the holiday season with a burst. Many young boys fashion bamboo stalks into homemade cannons using kerosene, sticks, and a bottle lamp, and compete with one another to get the loudest explosions. There is also the Festival of Lights and Renewal, which begins December 13, and features a lantern-making competition and the decoration of towns and villages with lights.  The celebration honors the patron saint of light, St. Lucy, with a switching on of the Christmas lights and a lantern-making competition.

Christmas In St. Vincent & the Grenadines

Nationals of Vincent & the Grenadines the annual Nine Mornings Festival each Christmas. Every morning starting nine days before Christmas, locals wake up before dawn and fill the streets to participate in a range of celebratory activities, from sea baths to costumed dances to bicycle rides.

Christmas In The Bahamas

The Bahamas’ most treasured and well-known traditions is Junkanoo on boxing Day, the day after Christmas, where masked revelers sing, dance, and drum their way through town streets in an exuberant parade.

Jamaicans celebrate by going to church, exchanging gifts with their families, and gathering for a large meal. Dinner on Christmas Day, the biggest feast for Jamaicans, includes chicken, oxtail, curry goat, roast ham, and rice and gungo peas. (Gungo peas, a Christmas specialty for Jamaica, usually ripen in December. Throughout the rest of the year cooks use red peas with the rice.) Jamaicans also prepare roast beef and/or pork as well. Another holiday specialty is Jamaican-style Christmas cake made of fruit soaked in rum. The drink of choice for Jamaicans during the Christmas season is sorrel. Made from dried sorrel (a meadow plant), cinnamon, cloves, ginger, sugar, orange peel, and rum, the beverage is usually served over ice. The music of the season reflects local culture, so it’s not surprising that reggae Christmas carols add a Jamaican twist to old favorites.

Christmas In The Dominican Republic

For those living outside the cities in the Dominican Republic, groups of singers stroll through the neighborhood singing traditional Dominican folk songs about Christmas.

In Puerto Rico, you’ll hear American carols, “Feliz Navidad” by Jose Feliciano and the traditional posada song early in the month. In homes, kitchen tables are cleared and women gather to form the assembly lines that will prepare dozens of pasteles. The men must make the local lechonera, or the traditional suckling pigs are slow-roasted over hardwood fires. Blood-sausage morcilla is alsoprepared from the pig’s innards, and arroz con gandules — rice and pigeon peas, fragrant with annatto and seasoned with cooking ham is served at Christmas. The meal is finished off with small glasses of coquito, the Puerto Rican eggnog that comes in seemingly endless variants.

After unwrapping gifts and demolishing the Christmas meal, Barbadians might retire to the Queen’s Park for the annual Police Band concert.

Christmas In The French Caribbean

The Christmas season lasts longest for the French islands, which continue to celebrate until Three Kings’ Day on January 6, commemorating “les Rois” or the coming of the Three Wise Men. This is the day when people everywhere take down their Christmas trees, even in islands where the date is not significant.

Belizeans are entertained by John Canoe bands with their costumed drummers, chanters and dancers at Christmas and their Christmas trees decorating come mainly from the Mountain Pine Ridge in Belize. A holiday favorite in Belize is a rum-and-eggnog concoction called “rum popo.”

Christmas In Trinidad and Tobago

Christmas in Guyana used to feature masqueraders going door to door wearing ghost-like costumes and dancing for money. Costumes included Long-lady – nicknamed Boom Boom Sally or Mother Sally – a figure in a flowing skirt on tall stilts and with the face of a woman and the Cow, a  wood-and-fabric structure in the shape of a cow that had an opening for a man to place it around him. One of their popular chant was: “Christmas come but once a year. And every man must have his share But the poor man in the jail. Drinking sour ginger beer.”

The food preparation in Guyana starts way before the day for black cake, ginger beer and garlic pork. Other special items include pepperpot, which is a must on Christmas morning.

Traditionally, a few days before Christmas, Haitians would cut pine branches to serve as Christmas trees or  hey would go to the market and get freshly cut trees brought from the mountains. At the base of the Christmas tree they would add a fairly large nativity scene which could occupy a large part of the living room. They depicted a cave manger, with Mary, Joseph, baby Jesus, the wise men, and sculptured stable animals complete with hay. On Christmas Eve, the children would place their shoes, nicely cleaned up and filled with straw, on the porch or under the Christmas tree for Papa Noel (Santa Claus) to remove the straw and put his presents in and around the shoes. Many Haitians drink anisette on Christmas Eve which is a mild alcoholic beverage prepared by soaking “anise” leaves in rum and sweetening it with sugar.

Christmas In St. Kitts And Nevis

St. Kitts has a carnival over the Christmas holidays – one huge party with music and dancing in the streets.   It features calypso, steel bands, the big drum and fife corps, masquerade and children’s dancing troupes, the Bull, Mocko Jumbies, clowns and string bands. Festive foods include black pudding, goat water, conchs, Johnny cakes, and roti. There are also competitions such as the Queen Show, the Calypso Monarch Competition and the Caribbean Talented Teen Competition.

In Suriname, Christmas begins early. Children  put out cookies and milk for Goedoe Pa (or Dearest Daddy) and his servants who would be busy delivering gifts throughout the country.  Goedoe Pa is a black man and his servants are also black. He and his servants leave the children’s presents next to their shoes on the morning of December 6th, with poems attached to the gifts. Surinamese celebrate Christmas Day and the following day, December 26th, called  Tweede Kerstdag.

Midnight Mass is obligatory for the religious, and the French tradition of a réveillon, or a late-night meal, is the norm for many in this Caribbean-French département. Pig is the centerpiece of the Christmas meal in Guadeloupe as well. Ham often has the place of pride at the table, but often it is a fresh ham that is closer to roast pork. Riz aux pois Congo, or rice with Congo peas, is another standby, but at times that is replaced with riz aux yeux noire — black-eyed peas and rice. There is also the shrubb beverage here, prepared from local rum infused with sweet spices like cinnamon and clove and further perfumed with macerated clementine peels.

Integrity Commission to act on those who didn’t declare