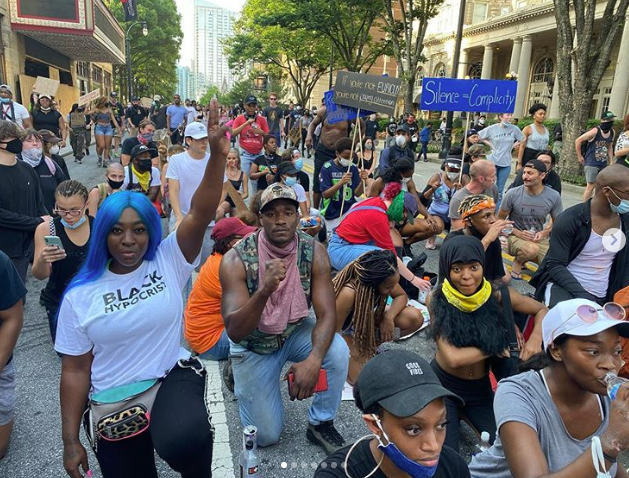 News Americas, NEW YORK, NY, Fri. June 5, 2020: A Caribbean-born dancehall star did not simply post a black square on #BlackoutTuesday on her social media account. She joined the protests currently rocking the United States on the heels of the police killing of another unarmed black man, this time, George Floyd.

In Atlanta, dancehall star and Love & Hip Hop: Atlanta star, Spice, joined protesters on #BlackoutTuesday in a show of support. The star was out in the street, rocking a blue wig and a white t-shirt that said: “Black Hypocrisy” in bold black letters, while taking a knee during the protest.

In a series of videos she posted, Spice can be seen leading the protest shouting “Black lives matters,” and “What To We Want?,” To which protesters returned “Justice.” She then asked: “When do we want it?,” and protesters replied: “Now.”

“They asking me why I’m out here and I reply ‘BECAUSE I AM A BLACK WOMAN, WITH A BLACK SON AND DAUGHTER,” she also posted on Instagram. “Stop criticizing and get up and fight this fight together we stand. visa is no use to me if I’m DEAD‼️ Talking about why I don’t do this in Jamaica. well I’m not there and You are so what you doing? I see your comments 🖤 but black American or not, we all one word, “BLACK.”

Other reggae and dancehall artistes were not as prominent but instead choose to speak out on social media or post a black box on their social media pages on Tuesday.

Stars like Rihanna and Shaggy urged all to vote in the US primaries, which also occurred on Tuesday while other singers weighed in with thoughtful comments.

Trinidad-born Rapper Nicki Minaj spoke out about the killing, the discrepancy in prosecutorial justice between cops and civilians, and strongly encouraged her fans to get involved in the fight for change.

“When 4 black THUGS commit a crime, if 1 person commits murder, they ALL get charged & CONVICTED. When white THUGS/COPS KILL innocent black people, ALL 4 of them are responsible‼️‼️‼️ They all watched an unarmed man die and did nothing‼️ Why do they have different rules?????” Minaj wrote, alongside a snapshot of a protest sign which recounted the last words of a number of black men and women who have been killed by police officers in recent years.

Singer Beres Hammond was moved to post: “But since we’ve got our pride we’ll survive. We believe in black beauty,” while Buju Banton posted: “Let your silence speak volumes.”

Bounty Killer wrote: “By any means necessary” and singer Romain Virgo encouraged his fans to “stand for something or fall for anything.”