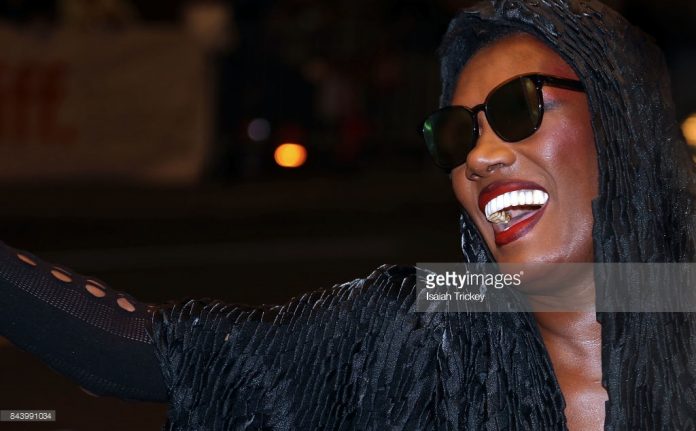 News Americas, MIAMI, Fl, Fri. May 11, 2018:  Caribbean international star, actress, model and singer, Grace Jones, is thrilling many in Miami as the screening of her life captured in a documentary continues at O Cinema in Wynwood.

‘GRACE JONES: BLOODLIGHT AND BAMI,’ directed by Sophie Fiennes, weaves together the layers of Grace Jones’ public and private life, as she moves effortlessly between different facets: she is gypsy, artist and partying hedonist, warm and funny but also a fierce side.

It traces nearly five years in the life of the Jamaica-born, singular vocalist, unparalleled stage goddess, fashion renegade and general paragon of the fabulous life, who will be 70 this month.

The film takes viewers on a holiday road trip across Jamaica, where Jones’ family roots and the story of her traumatic childhood are uncovered. In Jamaican patois, ‘Bloodlight’ is the red light that illuminates when an artist is recording, and ‘Bami’ means bread, the substance of daily life.

It includes Jones’ unique performances to hits such as ‘Slave To The Rhythm’ and ‘Pull Up To The Bumper,’ as well as the more recent autobiographical tracks ‘Williams’ Bloods’ and ‘Hurricane.’ and tenacious businesswoman.

The film continues tonight at 7 and 9:30 p.m., respectively and through May 17th.

Jones was born in Spanish Town, St. Catherine, Jamaica and moved when she was 13, along with her siblings, to live with her parents in Syracuse, New York.

She began her modelling career in New York state, then in Paris, working for fashion houses such as Yves St. Laurent and Kenzo, and appearing on the covers of Elle and Vogue. In 1977, Jones secured a record deal with Island Records, initially becoming a star of New York City’s Studio 54-centered disco scene.

Jones appeared in some low-budget films in the US during the 1970s and early 1980s. In 1984, she made her first mainstream appearance as Zula in the fantasy-action film ‘Conan the Destroyer,’ alongside Arnold Schwarzenegger and Sarah Douglas, and subsequently appeared in the 1985 James Bond movie ‘A View to a Kill,’ as May Day. In 1986, she played a vampire in Vamp, and acted in and contributed a song to the 1992 Eddie Murphy film ‘Boomerang.’

She appeared alongside Tim Curry in the 2001 film ‘Wolf Girl.’ For her work in Conan the Destroyer, A View to a Kill, and Vamp, she was nominated for Saturn Awards for Best Supporting Actress.