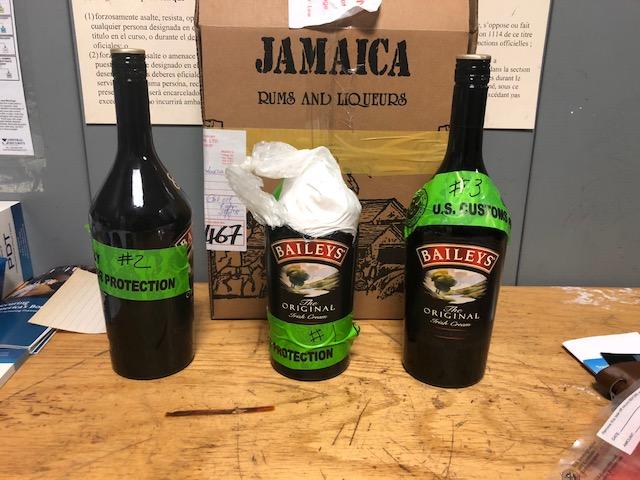 News Americas, JAMAICA, Queens, Thurs. Oct. 4, 2018: A Caribbean national is now under arrest after being busted with cocaine in Bailey’s bottles at the JFK Airport in Queens, NY.

Akeem Rasheen Lewis, a Jamaican citizen, arriving on a flight from Kingston, Jamaica, was busted on September 28th after Customs and Border Patrol (CBP) officers removed three bottles of Bailey’s liquor from a duty-free bag and discovered that the bottles appeared to be tampered with.

Lewis was escorted to a private search room where CBP officers discovered white powder wrapped in clear plastic bags within the bottles.  A total of three packages containing nine pounds of cocaine was discovered with an estimated street value of $115,000.

“This seizure demonstrates the dynamic border environment in which CBP officers operate at JFK.” said Frank Russo, Acting Director of CBP’s New York Field Operations.  “Our officers are determined to adapt and respond to these threats in an effort to protect the American people.”

Lewis is the latest Caribbean national to be busted with cocaine at JFK. In September, four Guyanese, including a husband and wife, were nabbed after attempting to smuggle cocaine in pellets that they ingested.

Two of them have admitted that they were to be paid US$6,000 for couriering the drugs.

The arrests brought the number of Guyanese who attempted to smuggle cocaine into the US via JFK to five for the month of September. The couple, Kurt and Maria Bruney, like Lewis, are in jail awaiting a court hearing and trial.