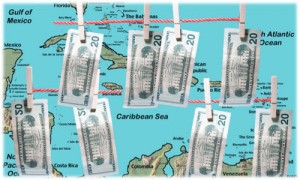 A major money laundering country, according to the U.S. is defined as one “whose financial institutions engage in currency transactions involving significant amounts of proceeds from international narcotics trafficking.”

The U.S. government says an increase in drug trafficking, a large financial sector, and a growing Internet gaming industry has left Antigua & Barbuda vulnerable to money laundering and other financial crimes and is urging the government to continue

to work to implement its Anti- Money Laundering action plan and devote resources to money laundering investigations and enforcement.

In The Bahamas, the U.S. State Department says drug traffickers and other criminal organizations take advantage of the large number of offshore banks registered

there to launder significant sums of money, despite strict know-your-customer and transaction reporting requirements.

Money laundering trends include the purchase of real estate, large vehicles, boats, and jewelry, as well as the processing of money through a complex web of legitimate businesses and international business companies (IBCs) registered

, and human smuggling, says the report while there is a significant black market for smuggled cigarettes and guns.

The U.S. is urging The Bahamas to criminalize bulk cash smuggling; establish a currency transaction reporting system; and ensure there is a public registry

of the beneficial owners of all entities licensed in its offshore financial center.

In Belize, the US says the Government of Belize’s encouragement of the growth of offshore financial activities leaves it vulnerable to money laundering, including offshore banks, insurance companies

“Belizean officials suspect there is money laundering activity in their two free trade zones, known as commercial free zones (CFZs),’ said the report. “The larger of the two, the Corozal Commercial Free Zone, is located on the border with Mexico. The smaller CFZ, the Benque Viejo Free Zone, is located on the western border with Guatemala. The Corozal CFZ was designed to attract Mexican citizens for duty free shopping; Belizean authorities believe it is heavily involved in trade-based money laundering and the illicit importation of duty free product

Belize is being urged to become Belize a party to the UN Convention against Corruption.

The British Virgin Islands is identified as a major target

for drug traffickers, who use the area as a gateway to the United States, the US State Department report says. It notes that exploitation of the islands’ offshore financial services, the unique share structure that does not require a statement of authorized capital, and the lack of mandatory filing of ownership information pose significant money laundering risks to the BVI.

The BVI is also a favored destination for registering

shell companies that can be established for little money in a short amount of time and the The U.S. government is urging the BVI to work toward the goal of making information on beneficial ownership of offshore entities available for legitimate requests by international law enforcement and, eventually, to the public.

In The Cayman Islands, the U.S. says most money laundering is primarily related to fraud and drug trafficking. It’s urging the government there to pay greater attention to the risks and proper supervision of non-profit organizations.

In Haiti, much of the drug trafficking as well as the related money laundering is connected to the United States, according to the report.

to leave the country vulnerable to corruption and money laundering, despite improving financial intelligence and enforcement capacity.

The Haitian government is being urged to continue

to devote resources to building an effective Anti-Money Laundering regime, to include continued

support to units charged with investigating financial crimes and the development of an information technology system.

In the Dominican Republic, corruption within the government and the private sector, the presence of international illicit trafficking cartels, a large informal economy, and a fragile formal economy make the country vulnerable to money laundering and terrorism financing threats, the U.S. says.

The DR is being urged to pass legislation to provide safe harbor protection for suspicious transaction report (STR) filers and criminalize tipping off.

The government is also being urged to better regulate casinos

companies, and strengthen regulations for financial cooperatives and insurance

The nightmare scenario for Republicans on immigration – Washington Post (blog)