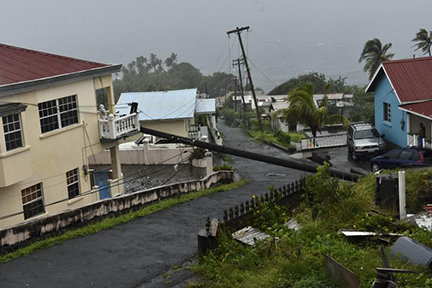 HAVANA, Mon. July 5, 2021 (Reuters) – Tropical storm Elsa neared landfall around Cuba’s Bay of Pigs on the south-central coast on Monday morning, bringing strong rain and winds to parts of the Caribbean’s largest island, and was set to churn across the country on its way to Florida.

As islands across the Caribbean continued to deal with the damage from the storm, Cuba’s Meteorology Institute said it was moving northwest at 22 kph (14 mph), and that sustained winds were peaking near 100 kph (60 mph).

Elsa was set to make landfall in the vicinity of the Bay of Pigs around midday, and exit Cuba overnight, between Havana and the city of Matanzas overnight, the institute said.

The U.S. National Hurricane Center (NHC) said a tropical storm watch and storm surge watch were in place for much of western Florida, which Elsa should approach on Tuesday.

“We continue with maximum attention focused on the track of storm Elsa through Cuba,” President Miguel Diaz-Canel tweeted early in the morning. “Authorities are working all over the country.”

More than 100,000 people in Cuba have been evacuated from the potential path of the storm, most to homes of family and friends, but thousands also to government shelters, state-run media reported.

“They evacuated people from the areas where there could be flooding, along the coast and river, but so far we’ve just had a constant drizzle, no strong rain or winds,” said Jorge Lemus, a kayak tour guide in the southern city of Cienfuegos.

Evacuations were under way on Monday morning in the capital Havana for fear that heavy rains could cause dilapidated buildings to collapse.

To make matters worse, Cuba is also experiencing a surge in coronavirus infections, which are at a record level.

State-run television showed images of farmers speeding up harvesting of fruit and vegetables to save them from the storm, and local authorities removing debris from the streets to prevent them flying around in the wind.

The Miami-based NHC said in an alert that tornadoes were possible across southern Florida on Monday afternoon and into Tuesday.

The approach of the storm forced Florida officials to demolish the remaining portion of a condo building : https://www.reuters.com/world/us/crews-prepare-bring-down-partially-collapsed-florida-condo-ahead-storm-2021-07-04 that collapsed 11 days ago, killing at least 24 people with over 120 still missing.

Elsa, which was downgraded from a hurricane on Saturday, has caused flooding, blown off roofs, toppled trees and damaged agriculture and infrastructure throughout the Caribbean, from Barbados and Jamaica to Haiti and the Dominican Republic.