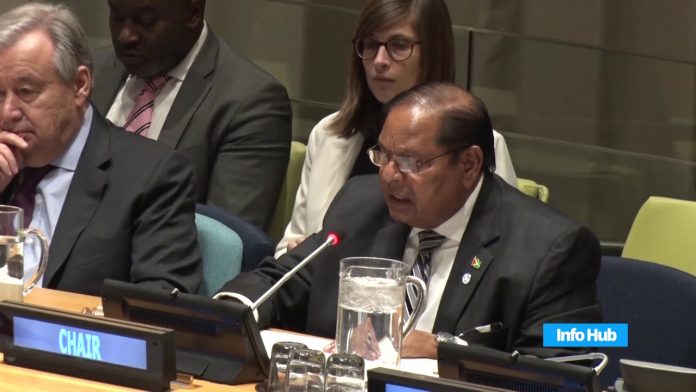 News Americas, NEW YORK, NY, Fri. Jan. 17, 2020: With its oil fortunes set to push  its GDP this year past the 80 percent growth mark, a South American CARICOM nation has assumed the Chairmanship of the Group of 77 and China for the coming year.

Nagamootoo delivered remarks on behalf of Guyana following an address and formal handing over of the Chairmanship by Minister for Foreign Affairs of the State of Palestine, Riad Al-Malki. In it, he vowed the country will maintain the Group’s core principles; to build upon the past achievements and to promote collective economic interests for all involved.

He added that Guyana has a commitment to sustainable development and will remain undistracted even in its new status as an oil-producing nation.

ABOUT THE GROUP OF 77

The Group of 77 (G-77) was established on June 15, 1964 by seventy-seven developing countries signatories of the “Joint Declaration of the Seventy-Seven Developing Countries” issued at the end of the first session of the United Nations Conference on Trade and Development (UNCTAD) in Geneva.

The Group of 77 is the largest intergovernmental organization of developing countries in the United Nations, which provides the means for the countries of the South to articulate and promote their collective economic interests and enhance their joint negotiating capacity on all major international economic issues within the United Nations system, and promote South-South cooperation for development.

Close To 200 Caribbean Nationals Among INTERPOL’s Most Wanted