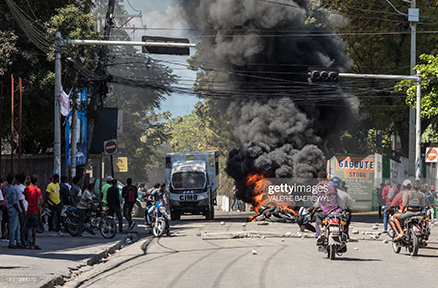 PORT-AU-PRINCE, Haiti, Weds. July 7, 2021 (Reuters) – Haiti became Latin America and the Caribbean’s first independent state of the colonial era and the first Black-led republic when it threw off French rule in the 19th century.

But it has suffered cycles of violence, invasion and repression for most of its subsequent history, including the dynastic Duvalier dictatorship.

Here are some key events in Haiti’s political history.

1492 – Spain colonises the island of Hispaniola after the arrival of Christopher Columbus. Two hundred years later Spain cedes the western half to France. Plantations worked by slaves of African origin produce sugar, rum and coffee that enrich France.

1804 – Haiti becomes independent under former slave Jean-Jacques Dessalines, who is assassinated in 1806.

1937 – In the worst incident of long-standing rivalry with neighbouring Dominican Republic, thousands of Haitians in border area are massacred by Dominican troops on the orders of dictator Trujillo.

1964 – Duvalier declares himself president-for-life. His dictatorship is marked by repression, enforced by the feared Tonton Macoutes secret police.

1971 – Duvalier dies and is succeeded by his son, Jean-Claude, or “Baby Doc”. Repression increases. In the following decades, thousands of Haitian “boat people” flee by sea to Florida, many dying on the way.

1988 – General Prosper Avril takes over from Namphy in a coup.

1990 – Avril declares a state of siege amid protests but resigns ahead of elections under international pressure.

1990 – Former parish priest Jean-Bertrand Aristide, a leftist champion of the poor, wins Haiti’s first free election. He is ousted in a coup in 1991.

1999 – Aristide is elected president for a second term despite disputed results.

2004 – Political unrest forces Aristide to flee but the country descends into violence.

2008 – 2010. Series of protests, triggered by food shortages, a cholera outbreak and then over elections.

2010 – A catastrophic earthquake kills between 100,000 and 300,000 people, according to various estimates, causing widespread damage in Port-au-Prince and elsewhere. Despite an international relief effort, the country is all but overwhelmed, exacerbating political, social and economic problems.

2019 – Moise steadily amasses power and rules by decree after Haiti fails to hold elections due to political gridlock and unrest.

Thousands take to the streets chanting “No to dictatorship” and calling for Moise’s resignation.

Haiti PM Pledges To Hold Elections As Quickly As Possible

A Minute With: the director of a documentary about Journey singer

Have a cigar: Cuba and Europe to write a business plan