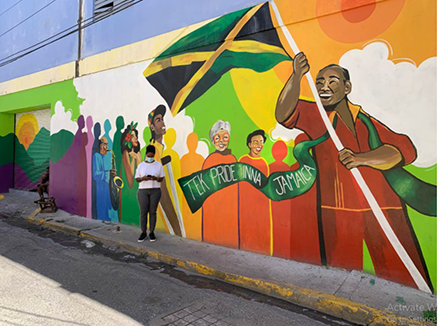 KINGSTON, Jamaica, Weds. June 2, 2021 (Thomson Reuters Foundation) – In the five years Alvin McGowan has owned Annali’s, a restaurant in downtown Kingston, he has never seen so many people walking around casually and unafraid – a remarkable sight given the area’s reputation as unsafe and rundown.

“The stigma of downtown at one time, the people were a bit afraid. But now it is different because of the murals on the walls,” McGowan, 55, said.

Vibrant, poignant murals have been appearing on the walls of Jamaica’s capital as part of Paint the City, a project by the nonprofit Kingston Creative to revive the city’s neglected downtown district and support the local arts community.

Since the project’s launch in 2018, locals say the area feels safer, and the flow of visitors and tourists coming to see the paintings is bringing in both interest and investment.

So far, more than 60 murals by local artists have gone up on the walls of buildings downtown and on Water Lane, a narrow thoroughfare within a warren of trash-strewn streets and derelict buildings with boarded-up doors and windows.

The murals showcase the artists’ personal experiences – such as the burden of wearing a mask during the pandemic – pay tribute to musicians like Bob Marley and even create the illusion of windows on the wall.

Some incorporate augmented reality, so when viewed through a phone camera they come to life with movement, music and narration.

“We have two goals. One is around people, and the other is around place,” said Andrea Dempster Chung, co-founder and managing director of Kingston Creative, which was founded in 2017.

Andrea Dempster-Chung, co-founder of Kingston Creative, stands in front of a mural painted by Equality Jamaica in downtown Kingston, Jamaica on May 4, 2021. THOMSON REUTERS FOUNDATION/Kate Chappell

At least 10 business owners have agreed to have their walls painted, and the municipal government and the Ministry of Culture, two of the project’s partners, commissioned murals to celebrate Jamaica’s musical heritage.

The Ministry of Tourism assists with funds to pay the artists, their assistants and painters, said Kingston Creative director Doris Gross.

With funding from institutions such as the European Union and the World Bank, Kingston Creative also runs a creative hub and co-working space, events, tours of downtown landmarks and free training in digital and business skills.

Together, the initiatives make up an effort to turn the city into the creative capital of the Caribbean, according to the Kingston Creative website.

“I think we have managed to impact the downtown area in terms of job creation and employment for creative people, and in terms of the development of public art,” she said.

While Kingston has attracted some investment in the past few years – with various companies and a government ministry moving in, plus a plan to build a luxury hotel on the waterfront, many Jamaicans still avoid venturing downtown.

The primarily commercial area is known to locals as a crime hotspot and home to squatters living in abandoned buildings and on untitled land.

Downtown has deteriorated gradually since the 1970s, when political conflict and crime caused business owners and residents to flee further uptown, explained Delano Seiveright, a senior advisor and strategist at the tourism ministry.

But now Kingston Creative’s initiatives are drawing more positive attention from investors and art-loving Jamaicans, as well as lending nearby residents a newfound sense of self-esteem, he said.

“It is probably too early to say definitively that it has a robust effect on the economy and crime, but it has garnered the interest of people in Jamaica who would not usually invest in downtown Kingston,” he said.

“There is that social interest to make it into what a downtown can be.”A mural by artist Shanique Stewart depicts Jamaican culinary customs on Water Lane in downtown Kingston, Jamaica on May 4, 2021. THOMSON REUTERS FOUNDATION/Kate Chappell

Anthony Clayton, a professor of Caribbean sustainable development at the University of the West Indies in Kingston, said efforts like Paint the City can rejuvenate abandoned communities.

“Beautification can play a role in helping to start to turn these situations around,” Clayton said.

But art is not enough to undo 50 years of damage, he added.

Jamaica has a long history of political violence and gang warfare, and last year had the highest homicide rate in the Latin American and Caribbean region, according to InSight Crime, a non-profit think-tank.

Locals and project organizers say the area seems safer since the murals started going up, but statistics from the Jamaica Constabulary Force (JCF) paint a more complicated picture.

Since 2017, major crimes such as murder, aggravated assault, rape and shootings have increased. However, robberies and larcenies have fallen, while break-ins have stayed about the same.

Gang activity can be blamed for much of the major crime activity, said JCF spokesman Dennis Brooks.

“That doesn’t mean (Paint the City) doesn’t have an impact,” he said.

COVID-19 restrictions mean Kingston Creative has had to pause most of its tours and events, but the murals are still being painted.

Errol Keane, a 27-year-old graphic designer, painted a mural of a group of women physically and emotionally supporting each to address the need to be open about sexual assault.

Keane said the project has led to more people knowing his name and some new commissions.

“People are seeing this space and being uplifted and everybody feels good about it. There is no graffiti over the murals,” he added, noting that shows the community has taken pride in them.

Ueli Bangerter, 52, the owner and manager of traditional Jamaican restaurant F&B Downtown, said before the pandemic his partnership with the group was bringing more people to the area and his restaurant.

Revenue has gone up 25% since Kingston Creative began hosting events, he noted.

“Years ago, everybody said, ‘Downtown, forget it, you must be mad’, with the shootings and it was dirty. Now they realize it is nice and clean,” he said.

Peter Issa, general manager of local firm Issa Construction, said his company has worked with Kingston Creative before, and is currently investing in downtown properties and installing a mural on one of their buildings.

“We definitely believe in downtown Kingston and have invested a great deal of time and money into revitalizing the area,” Issa said.

“We want to bring back vibrancy, Jamaican businesses and tourism downtown.”

3 Kidnapped Missionaries Are Freed in Cameroon