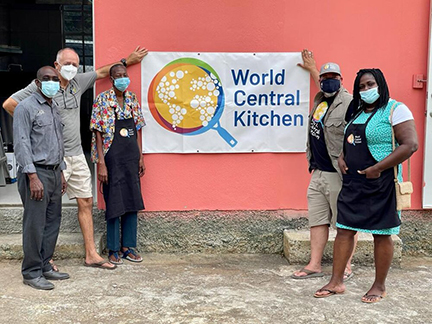 News Americas, MIAMI, FL, Tues. Mar. 2, 2021: The Duke And Duchess of Sussex’s Archewell Foundation, has helped bring some much needed “relief” to one area of Dominica.

Through their partnership with World Central Kitchen, a non-profit founded by chef José Andrés that helps feed communities worldwide, primarily in the aftermath of natural disasters, a “Community Relief Center” was completed in Dominica thanks to Prince Harry and Meghan Markle.

Dominica suffered serious damage from Hurricane Erika in 2015 and Hurricane Irma in 2017; Hurricane Maria, which struck weeks after Irma, “destroyed over 90% of the island’s infrastructure.”

World Central Kitchen said the new community relief center, developed in collaboration with non-profit the Resilient Soufriere, Dominica Project and the Ministry of Education, is located inside the reconstructed Soufriere Primary School, which was seriously damaged by Maria.

The school “was constructed under Dominica’s climate resiliency plan to be a safe shelter against future hurricanes.” The kitchen equipment includes refrigerators and freezers that can work entirely off the electrical grid using solar power. WTC said it anticipates being able to prepare thousands of meals per day in the direct aftermath of any future storm. The Center is ready for the school’s staff to cook for students and the community, and WTC will be launching a culinary training program later in the year.