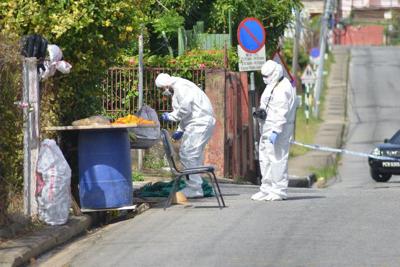 Over 400 Murders In This Caribbean Nation

The murder rate for 2018 has climbed to 484 so far this year in one Caribbean island alone. Trinidad and Tobago media reports indicate the total so far in 2018 with the killing of a 33-year-old man who es­caped a pre­vi­ous at­tempt on his life.

Po­lice said Roland “Grover” Phillip, 33, was shot and killed at Sun­shine Av­enue, San Juan, Trinidad around 6 pm. Res­i­dents said they heard gun­shots but did not im­me­di­ate­ly come out­side. A lit­tle while lat­er they dis­cov­ered Phillip bleed­ing from gun­shot wounds about the body. He was tak­en to hos­pi­tal but was pro­nounced dead on ar­rival.

Po­lice said Phillip had been shot at last month but es­caped then with a mi­nor flesh wound. Phillip was one of three men killed be­tween Sat­ur­day night and Sun­day evening.

Jamaican-born Dalton Harris, the new X-Factor winner, yesterday took to Instagram to say “Thank You” to all his fans and those who voted for him in the UK Diaspora.

“I have been trying to find words to describe my emotions and gratitude and thankfulness but none of them are enough,” he posted. “My dream is a reality… To kids everywhere that think there are limits, understand there are NONE.” Harris has been rewarded with a recording contract with Synco Records, Simon Cowell’s label owned by Sony. The Jamaican-born singer was mentored by One Direction star Louis Tomlinson on his first season as an X Factor judge.

“I found my artistry with [Tomlinson], we worked well together, and he’s a really good friend.”

India’s Prime Minister Narendra Modi on Monday took to Twitter to say he looks forward to “closer ties with Jamaica.” The PM met Prime Minister Andrew Holness at the G20 in Argentina and said the two discussed sectors such as energy and climate change during the interaction.

A Win For Chris Gayle

West Indies cricket star Chris Gayle Monday won an Aus$300,000 (US$221,000) payout from an Australian media group which claimed he exposed his genitals to a massage therapist. The all-rounder was accused by Fairfax Media, publisher of The Sydney Morning Herald and The Age, in a series of stories in the newspapers in 2016. Gayle strenuously denied the allegations, claiming at the time that the journalists behind the story wanted to “destroy him.” Continue Reading

A Norwegian chef was, on Monday, brought before the Serious Offences Court in Kingstown, St. Vincent and the Grenadines, charged with cocaine possession. Dan Martinsen, 29, pleaded guilty to a charge that on Friday, Nov. 30, at Port Elizabeth, Bequia, he had in his possession a controlled drug, to wit, 0.30 grams of cocaine. Continue Reading

Shark Attacks Boy In The Bahamas

A family’s dream vacation to the Bahamas took a terrifying turn when a seemingly docile nurse shark went on the attack. The Jones Family from Sandy, Utah was told swimming with the sharks were completely safe because of their small size and non-threatening behavior. Eight-year-old Asher walked into the water and that’s when one of the nurse sharks sunk its teeth into the boy’s back. Continue Reading

A sixty-year-old tourist visiting the island from Ukraine drowned on Kim Sha Beach Sunday afternoon. The Daily Herald reported that the man was not showing any signs of movement while in the water. A number of beachgoers rushed to the man and brought him to shore.

They performed CPR while paramedics were called to assist. He was then transported to the St. Maarten Medical Center for further treatment. Police spokesman Chief Inspector Ricardo Henson said on Sunday evening that the man passed away at the hospital.

ABOUT: News Americas Now News Network is a newswire covering the Americas – the Caribbean and Latin America and its Diasporas with syndication on Google News, Apple News, across 21 plus news sites including on the Caribbean Today in Florida, on Irie Jam radio in NYC and on Social Media – Facebook, Twitter, Instagram, YouTube and Linked In.

China’s Culinary Impact On The Caribbean