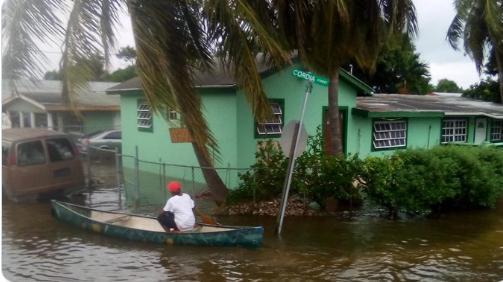 The people of the Bahamas need your help. The South Florida community is beginning to collect relief supplies and donations for the Bahamian people at locations at all of Miami-Dade and Broward fire stations. And The National Association of the Bahamas has set up an online fund to donate money for their hurricane relief efforts.

Many are flooding to social media to post images of missing relatives and friends in the north western Bahamas as Hurricane Dorian’s death toll their reached 5 to date.

The first named victim of Hurricane Dorian’s slow crawl through the Bahamas has been named. He is 7-year-old boy named Lachino Mcintosh.

“We are in the midst of a historic tragedy,” the Bahamas’ Prime Minister, Hubert Minnis said Monday, calling the devastation from Dorian “unprecedented and extensive.”

Water in many areas, including Freeport, reached roofs and the tops of palm trees. The main city town of Abaco Marsh Harbour on Abaco Island was completely destroyed.

Bahamas Power and Light has revealed its office in Abaco has been flattened by Hurricane Dorian.

Choppers were able to reach Abaco and begin the evacuation of several injured persons to Nassau Monday afternoon.

“We stand with the people of The Bahamas in this time of great threat and pledge our support in their time of recovery,” Jamaica’s Prime Minister Andrew Holness said Monday.

Celebrity Chef Jose Andres and his World Kitchen volunteers are in Nassau, Bahamas readying meals to take to the victims of Hurricane Dorian.

Sandra Torres, the runner-up in August’s presidential election in Guatemala, has been arrested on suspicion of breaking campaign finance rules and of unlawful association.

India on Monday handed the West Indies a series whitewash and a 2-0 test series sweep, sweep series as they claimed the win by 257 runs at Sabina Park in Jamaica.

And fans of carnival braved the rain Monday to wine and party down Eastern Parkway in Brooklyn at the 52nd West Indian American Day Carnival.