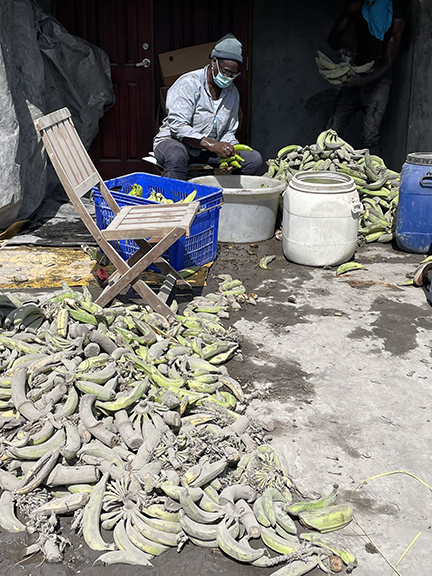 News Americas, KINGSTOWN, Saint Vincent, Mon. April 26, 2021: The agricultural loss due to the continuously erupting volcano in Saint Vincent and the Grenadines has been put at $150 million.

That’s according to the Minister of Agriculture of the Eastern Caribbean nation, Saboto Caesar, who was quoted by news784.com/.

“We are facing a catastrophe in agriculture, fishing, road infrastructure and other areas. We have problems that affect food security and sovereignty; the affordability, accessibility and availability of food is at risk”, stated Saboto Caesar when speaking before the Special Advisory Commission on Management Issues (SACMI) of the Inter-American Institute for Cooperation on Agriculture (IICA).

The eruption of the Islands lone active volcano La Soufriere went explosive on April 9th left not only residents displaced but animals at the mercy of nature’s fury.

Agricultural producers located in the communities of the country’s “red zone” had to relocate livestock to ensure its survival.

Preliminary assessments reveal that in the Red Zone, 100% of vegetable crops and 60% of the arrowroot have been lost.

The weight of the heavy ashfall has caused the leaves and branches of many tree crops to snap.

Livestock left to roam freely is now without forage as the ash and dust have totally destroyed their pastures in the Red Zone.

St. Vincent’s Ministry of Agriculture is bringing water and feed to the animals in the red zone daily that have survived the disaster.

In the last 24 hours, only a few long-period, hybrid and volcano-tectonic earthquakes have been recorded and there was no further tremor. Seismic activity at La Soufrière, has remained low since the tremor associated with the explosion and ash venting around noon on April 22nd.

However, explosions with accompanying ashfall, of similar or larger size can restart with little or no warning. The volcano remains at alert level Red.

A Quandary for Mexico as Vigilantes Rise

Puerto Rico to Debate Medical Use of Marijuana