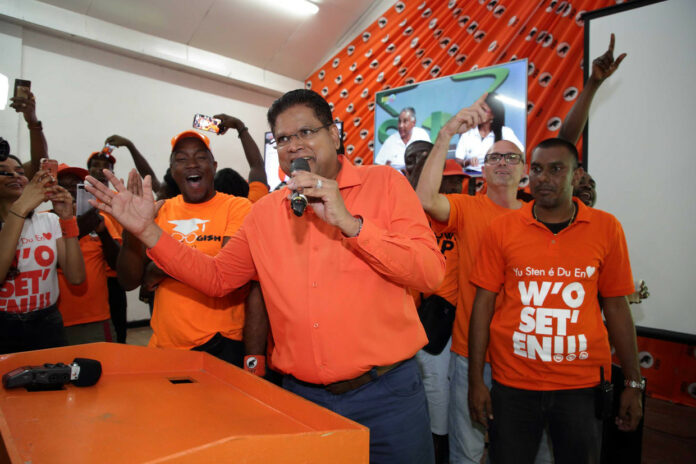 News Americas, WASHINGTON, D.C., Weds. May 27, 2020: Suriname’s main opposition is being predicted as the winner of the elections there on Monday.

Leader of the Progressive Reform Party (VHP), Chandrikapersad Santokhi, predicted victory in the country’s Monday’s legislative elections with 46 percent of the votes counted as of yesterday.

“We will become the largest party in Suriname,” Santokhi was quoted as saying by France 24, as supporters danced, sang and hailed their leader as the next president while they watched results trickle in on a large screen at party headquarters.

The partial results means convicted murderer and the National Democratic Party (Nationale Democratische Partij or NDP) and its president, Desiré Delano “Desi” Bouterse, running for re-election, could be ousted from office.

“We have worked hard the past five years,” Santokhi told France 24.

The NDP made no comment to the media early on Tuesday.

Bouterse was sentenced by a Surinamese court in November 2019 to 20 years in prison for the December 1982 executions of 15 political opponents.

Voters stood in line for hours to cast their vote despite the COVID-19 pandemic in what has been dubbed “the mother of all elections.” One voter, ‘The Yin of the Pine Needle @ngasieta,’ posted: “Standing in a line for more than two hours in this grueling heat is NOTHING if it means overthrowing the imbeciles that are the NDP.”

The Electoral Observation Mission of the #OASinSuriname observed the elections Monday as did a CARICOM mission.

There are some 383,000 eligible voters in the country.

Once the new assembly has been sworn in, its 51 members will vote for the new president, who will need a two-thirds majority to be elected. A formal declaration of the election results is due within a month while the new president should be sworn in before August 13, 2020.