Home Latest News In Largely Ignoring Haiti, US Administration Proves Its Business As Usual When... 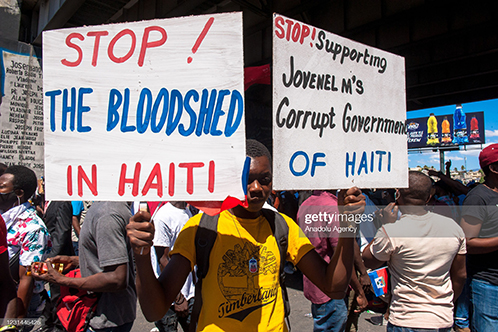 News Americas, NEW YORK, NY, Tues. Mar. 16, 2021: Haiti is essentially “burning” again, but does the US care? The Joe Biden administration’s handling of the crisis so far shows its simply business as usual as far as the US’ foreign policy towards Haiti, and to a larger extent the Caribbean, goes.

“Do as little as possible,” seems to be the mantra time and again, as this important Third border is relegated once more to stepchild status.

The slap in the face this time is that many Haitian and Caribbean voters helped Joe Biden and his Caribbean roots Vice President, Kamala Harris, make history. But so far, there has been nothing but the sound of silence from both on Haiti.

Of course, throw in the deportations of many Haitians back to a country in turmoil, just less than two months into the administration, and you feel the collective kick in the teeth.

So far, the Biden administration has said as little as possible on Haiti, and has pretty much tried to side step the issue or ignore it. It has, however, has doubled down on its support of Haitian President Jovenel Moïse, who many say is clinging to power beyond the legal end of his term last month.

Haitian judges, lawyers, and civil society leaders, including two who lead one of Haiti’s premier human rights organization, say Moïse’s term legally concluded on Feb. 7th. So does thousands who continue to protest against him, almost daily.

Moise for his part says he plans to hold a constitutional referendum in June, followed by legislative and presidential elections in September and November of this year.

The US’ new secretary of state, Anthony Blinken, is off on an Indo-Pacific tour in the midst of the pandemic. He has also found time to have a call with the President of Paraguay, but nothing with CARICOM leaders, who should be rallied on the Haiti crisis.

Prior to his confirmation, Blinken tweeted: “We will always support democracy, human rights, and the security and prosperity of Haiti.”

The State Department and U.S. Ambassador to Haiti Michele Sison has also said free, fair and credible elections, the restoration of democratic institutions, and adherence to the rule of law are essential.

And during testimony before the House Foreign Affairs Committee on March 10, when pressed on Haiti by Congressman Andy Levin, a Michigan Democrat who has been outspoken about his lack of confidence in Moise’s ability to organize free and fair elections, Blinken said: “I share your concern about some of the authoritarian and undemocratic actions that we’ve seen particularly this irregular rule by decree and decrees getting into the heart of Haiti’s democratic institutions.

“So we’re making it very clear that for now, while we have this, decrees need to be limited to essential functions and to your point, we need to see the Haitians organize with international support — genuinely free and fair elections this year.”

That’s it! The lukewarm attitude proves once again that Haiti, and by extension the Caribbean, is hardly important in the bigger scheme of things.

More concern has been expressed by some Democratic lawmakers and celebrities than the administration and even the Haitian roots senior staffers in the administration including Karine Jean-Pierre, who has gone woefully silent since her selection to serve in the White House.

Members of the U.S. House Foreign Affairs Committee, including Chairman Gregory Meeks (D-NY), which held a March 12th, has urged the secretary of state to “unambiguously reject” Moïse’s attempt to stay in power.

“Haiti’s a mess. The people are suffering. This has to stop!,”  Congressman Meeks said.

Senate President Pro Tempore Patrick Leahy (D-VT), also weighed in, tweeting that Haiti is in “worse shape” now than when Moïse first took power. He also called on the administration to support an “inclusive transition.”

#FreeHaiti is now trending on Twitter as many take their outrage online and garner support for the movement from celebrities like Jimmy-Jean Louis, Cardi B, Bobby Shmurda, Karen Civil, and Tory Lanez.

On Monday, Black Alliance for Peace held a rally in Chicago in front of the Haitian consulate and in D.C.

The outrage is growing louder by the day as the US’ administration seems content to watch Haiti burn again.