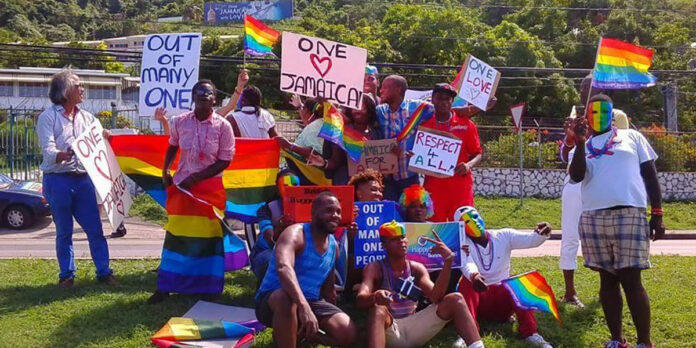 By Rachel Savage and Kate Chappell

KINGSTON, Jamaica, Thurs. Feb 18, 2021: (Thomson Reuters Foundation) – Jamaica should repeal its colonial-era gay sex ban, the top rights body of the Americas said on Wednesday, in a symbolic landmark ruling on LGBT+ rights in the Caribbean.

Two Jamaicans who initiated the case in 2011 – after they were attacked by homophobic gangs and sought asylum overseas – said the 1864 ban on the “abominable crime of buggery” and “gross indecency” legitimised violence against LGBT+ people.

“I’m overwhelmed with joy,” Gareth Henry, one of the claimants who is now a refugee in Canada, told the Thomson Reuters Foundation.

“Gays and lesbians continue to be killed and tortured because they are deemed to be different,” he said, describing how he was beaten by the police in front of a mob.

A spokeswoman for the Jamaican government was not immediately available to comment.

It is the first time the Inter-American Commission on Human Rights (IACHR) has ruled that criminalising gay and lesbian people violates international law, said the Human Dignity Trust, an LGBT+ legal advocacy group which brought the case.

Jamaica is one of nine Caribbean countries that criminalise gay sex. Homophobia is rife and the penalty for same-sex intimacy is up to 10 years in jail with hard labour. Gay sex is illegal in 68 countries worldwide, says the ILGA advocacy group.

Wednesday’s ruling said Jamaica’s law violated the rights of Henry and Simone Edwards – who fled to Europe after being shot multiple times outside her home – to human treatment, equal protection before the law, privacy and freedom of movement.

“It’s a huge legal victory that’s relevant not only for Jamaica but for the entire region,” said Tea Braun, director of the Human Dignity Trust.

“It is an important pressure point and hopefully it will accelerate the repeal of these laws,” she said, adding that the largely symbolic ruling would not lead to immediate change.

The Washington-based IACHR is the human rights arm of the Organization of American States, created to protect human rights in the region, but without its own enforcement powers.

Jamaica’s Prime Minister Andrew Holness said in 2014, when in opposition, that he wanted to put the gay sex ban to the public in a “Grand Referendum”, along with marijuana, abortion and whether Britain’s Queen Elizabeth should stay head of state.

The IACHR decision was made in September 2019, but remained strictly confidential under its orders until Wednesday.