News Americas, NEW YORK, NY, Fri. Dec. 8, 2017: A top Caribbean-born cyclist has been charged with manslaughter for a fatal accident that occurred in St Catherine, Jamaica.

Jamaican cyclist Marloe Rodman, the reigning Beacon Cycling on the Avenue champion, was charged on Tuesday with manslaughter after he was involved in a fatal accident on November 26th. According to the Jamaica Gleaner, Rodman was riding his motorcycle along Gordon Boulevard in St Catherine when he lost control of the bike.

The motorcycle then crashed into a stationary motorcycle on which Anthony Gordon was sitting. Both Gordon and Rodman were taken to hospital where Gordon succumbed to his injuries.

Jamaica has qualified for the Rugby World Cup for the first time in history.

Also making the cut for 2018 is Mexico’s women’s rugby team.

Jamaica’s men scored a last-minute match-winner to see off the threat of pre-tournament favorites Guyana in the final and snatch an historic 28-24 victory.

The Mexican women overcame a loss in their second game to pull through.

In addition to playing at RWC Sevens 2018, the sides also qualified for the 2018 Central American and Caribbean Sports Organisation (CACSO) Games, Commonwealth Games and the HSBC World Rugby Sevens Series qualifier in Hong Kong next April.

The beleaguered West Indies cricket squad will be without their skipper as they go 0-1 into the second test match against New Zealand on Sat. Dec. 9, 2017.

Captain Jason Holder was suspended by the International Cricket Council, (ICC), on Tuesday for one Test, after his team was found guilty of maintaining a slow over rate during their defeat to New Zealand in the first test on Dec. 1st.

A spineless batting effort last Friday sent the West Indies crashing to an innings and 67-run defeat in their opening test match against New Zealand.

For New Zealand, the win gave them a precious 1-0 lead in the two-match series, ensuring they extended their record of not having lost a series to the Windies at home in 22 years.

Holder, 26, will miss the second test in Hamilton and has also been fined 60 per cent of his match fee, while his teammates incurred a 30 per cent fine after the West Indies were charged with the over-rate offence following their defeat in Wellington.

Gayle Back In Action For Windies

Jamaican-born cricketer, Chris Gayle, has been called back into the Windies fold.

On the heels of a disastrous opening test performance by the West Indies team against the Kiwis, Cricket West Indies selectors announced that Gayle will represent the Windies in the upcoming One Day Internationals, (ODIs) and T20s. The first ODI is set for December 20th in Whangerei while the second and third will be played in Christ Church on Dec. 23rd and Dec. 26th. 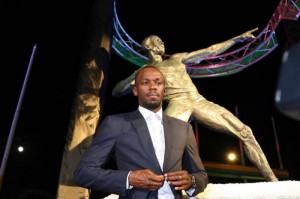 The GOAT Bolt Reacts To His Statue

That’s how the GOAT, (Greatest Of All Time), Usain St. Leo Bolt, is reacting to his own statue on his home turf.

“Just a kid from Sherwood,” the triple Olympian Bolt, added by Tweet hours after an eight-foot bronze statue in his likeness was unveiled at Jamaica’s National Stadium in Kingston, Jamaica on Sunday, Dec 3.

The statue, sculpted by Basil Watson, shows Bolt making his trademark: ‘To The World,’ stance.  It stands in front of the place where 15 years ago, the Sherwood Content, Trelawney-born athlete, won the junior championships and announced himself to the world.

The Jamaican sprinter, who retired from a superlative career in track and field after the IAAF World Championships London 2017, was at the ceremony to show his appreciation for the statue.

“For me this is up there, it can’t be doubted that this is one of the greatest moments in my career,” Bolt said. “Having a statue in the National Stadium where it all began; there are no words, I am just happy and really excited about this.”

He added: “It was all worth it: the losses, the injuries, everything I’ve been through, it’s all worth it. It’s a wonderful thing to look back and see what your career has brought you. I’m very happy and proud of myself for the work. It’s just a good time and I am in a good place.”

Haitians Must Now Get A Visa To Travel To Guyana

Topshop: playing with the big boys but keeping it real