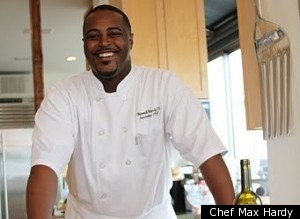 Hardy won over New Orleans own, Chef Gason Nelson. Both are former contestants on the popular Food Network show, ‘Chopped.’

Both chefs had to prepare a dish from the surprise basket which included whole European seabass, branzino, with Asian ingredients and Jerk seasoning. At the end, it was Hardy, the personal chef to Amar’e Stoudemire from the New York Knicks and his family, who was declared the ‘jerk’ champion.

Thousands of patrons gathered at the Sunday, July 20th festival to savor the dazzling array of jerk foods including peanuts, potato chips, lobster, corn and fritters.

And what’s a festival without music performances. Reggae’s Mr. Vegas, Etana and UK-based hit machine Maxi Priest all combined to rocked the audience with their impressive catalogue of hits.

“This year’s festival delivered an enjoyable experience to patrons and I would like to thank all those who helped to make it a resounding success,” festival co-founder Eddy Edwards declared at the end of the evening. “We look forward to next year as we continue to build this festival in New York.”