News Americas, LONDON, England, Tues. Oct. 14, 2014: The MOBO Awards are back after a five year hiatus and no surprise as reggae’s Chronixx, born James McNaughton, is among the nominees in the Best Reggae Category this year.

Also on the 2014 nominees list are Alkaline, aka Earlan Bartley, a Jamaican star who has become one of Dancehall’s most polarizing figures with hard core rhymes and killer hooks is also among the nominees in this category along with reggae crooner Taurus Riley; Popcaan, a well-known Jamaican dancehall artist who received the MOBO for Excellence in Music and Entertainment (EME) Award for ‘Best New Artist’ in 2011 and Jason ‘Stylo G’ McDermott, a British Reggae artist who has continued gaining attention in the underground urban scene since his arrival to the UK.

Marking its 19th anniversary, the MOBOs will be held at The SSE Arena, Wembley on October 22nd and will be broadcast on ITV2.

The MOBO Awards have helped ignite the careers of numerous UK artists including Amy Winehouse, Craig David, Ms Dynamite, Estelle, N-Dubz and Emeli Sandé, who all went on to achieve great success after being recognised by MOBO.

This year’s crop of multiple nominees once again asserts the MOBO Awards’ position as a leader in spotting emerging talent.

To vote for this year’s nominees, go to www.mobo.com/voting. Tickets to attend the MOBO Awards are available via www.mobo.com/tickets. 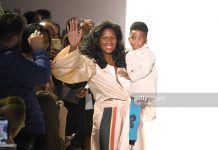 The Caribbean Is In Da House At New York Fashion Week