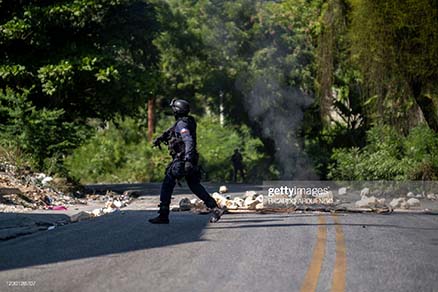 News Americas, NEW YORK, NY, Tues. Nov. 9, 2021: By nature, police officers are circumspect when it comes to activism, especially when it comes to polarizing issues like climate change. But the severity of the climate crisis demands a new approach. In the years ahead, severe weather events will continue to disproportionately impact vulnerable populations, particularly those of Small Island Developing States.

The law enforcement community needs to work as aggressively to respond to a warming climate as we do to reverse all dangerous trends that pose threats to police and the communities they are sworn to protect.

The most visible threat of climate change are the natural disasters, occurring with greater severity and frequency, that directly obstruct law enforcement’s ability to operate. Powerful weather events have the potential to wipe out emergency services, power and communications infrastructure, making it nearly impossible to ensure the safety of our communities.

Across the Middle East and North Africa, record temperatures and drought place further stress on fragile ecosystems, as well as the supply chains that preserve regional food security.

In the Caribbean, police are stretched thin, with personnel and resources more frequently redirected to emergency response operations during intense tropical storms and other natural disasters. Just this year, St. Vincent and the Grenadines was hit by a volcanic eruption, destroying communities, damaging basic infrastructure like power generation and displacing thousands.

Climate change is also accelerating economic strains and subsequent migration patterns, therefore driving vulnerable people into the arms of existing criminal groups that perpetuate transnational crimes like human trafficking. As we have seen, transnational criminal groups never pass up an opportunity to capitalise on the vulnerability of others. And during extreme weather events, they find new and devious ways to exploit and profit from these “climate refugees.”

At the United Nations Climate Change Conference (COP26), there are numerous ways that governments can take action to support their domestic policing communities.

First, Nationally Determined Contributions must be far more ambitious if the world is to reach carbon neutrality by mid-century, as current trends have us on a path to increase emissions by 16 percent in 2030. The UAE recently announced a goal of net zero emissions by 2050, which will be achieved through a whole-of-government effort, and St. Vincent and the Grenadines’ original Nationally Determined Contribution committed to achieving an unconditional, economy-wide reduction in greenhouse gas (GHG) emissions of 22% by 2025.

Despite lacking the resources accessible to wealthier countries, many island nations have taken some of the toughest stances on climate change.

Second, wealthier and more developed countries must step up their commitments to the planet. Developed countries have already fallen short on their promise to mobilize $100 billion dollars a year for climate action in developing countries.

We all must help the most vulnerable countries, particularly Small Island Developing States, become more resilient as climate change threatens vital tourism industries, as well as food and water security.

But change must occur at every level of government – police must take action too.

In tandem with the city of Dubai’s ambitious goal of becoming “the world’s lowest-carbon-footprint city by 2050,” Dubai Police committed to reducing its carbon emissions and energy and electricity consumption through the adoption of energy-efficient appliances, expanding solar rooftops, optimizing routes to reduce fuel consumption and integrating hybrid cars into its police fleet.

Our countries regularly collaborate with INTERPOL and regional bodies like AMERIPOL and AFRIPOL to share best practices, build capacity where it is needed, encourage adoption of new technologies, and welcome continued cooperation with regional and international policing organizations.

But over the coming months and years, law enforcement must prioritize managing the threats of climate change when we come together to address global challenges facing our community.

Speaking about the climate crisis at the United Nations General Assembly last month, prime minister of Barbados Mia Amor Mottley warned, “If we do not control this fire, it will burn us all down.”

If others fail to control this metaphoric fire, it will increasingly fall to us – first responders and police – to control the literal fire that results.

EDITOR’S NOTE: Major General Dr. Ahmed Naser Al-Raisi is the Inspector General at the Ministry of Interior in the United Arab Emirates and serves on INTERPOL’s Executive Committee. Colin O. John is the President of the Association of Caribbean Commissioners of Police, Caribbean and the Americas World Chair for the International Association of Chiefs of Police and Commissioner of Police for St. Vincent and the Grenadines.