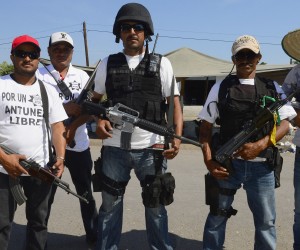 News Americas, NEW YORK, NY, Fri. April 4, 2014: It is far more dangerous to do business in Latin America than in the Caribbean, according to the latest 2014 Latin America Security Index.

FTI Consulting, Inc., a global business security assessment firm, which has been issuing the annual report since 2007 with the objective of minimizing potential risks related to security issues in the region, says Venezuela, Honduras, Guatemala and Mexico are the most dangerous places in Latin America for companies and executives.

By contrast, only Haiti in the Caribbean made the list of most dangerous nations that were ranked from 5 to 2, with 5 being the most unsafe.

“Public insecurity has a corrosive effect on the region’s competitiveness in the fight to attract investment dollars,” the report’s authors said.

The Latin America Security Index says that organized crime and extreme violence surrounding the activities of drug cartels and the movement of drugs from production to consumer markets continues to be a major source of public insecurity in parts of Central America and Mexico.

The Index notes that social and political unrest has become a factor for some of the more troubled economies, such as Venezuela.

The Latin America Security Index also observed that despite significant investment that has led to marked improvements in some countries such as Colombia and Brazil; they have still seen a resurgence of crime that has been difficult to control. Colombia, Brazil, El Salvador, Nicaragua and Bolivia were ranked at number four on the safety list meaning there is still a high level of danger.

Argentina, Paraguay, Peru, Ecuador, Panama and the Dominican Republic were ranked at three.

Costa Rica, Chile and Uruguay remain the safest places according to the report with a 2 ranking.

The report says social mobility and inclusion has not eliminated the scourge of public insecurity in Latin America and it remains, together with organized crime, money laundering, corruption and drug trafficking, paramount on regional government agendas.

“Over the past decade, Latin America has mostly demonstrated strong economic growth with better integration, more commitment to the weakest social sectors and with more entrenched democratic governments,” said Frank L. Holder, Chairman of Latin America for FTI Consulting and author of the Latin America Security Index. “However, social mobility and inclusion has not eliminated the scourge of public insecurity. It remains, together with organized crime, money laundering, corruption and drug trafficking, paramount on regional government agendas.”

Five of the ten most dangerous cities in the world are in Mexico while forty of the 50 most violent cities are in Latin America.

All eyes on weather as Okanagan wildfires continue to burn