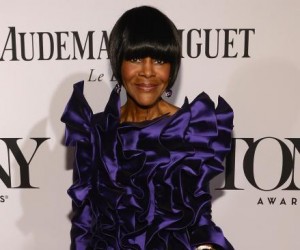 Tyson is among the nominees for Outstanding Lead Actress in a Miniseries or a Movie for her role as Miss Carrie Watts in “The Trip to Bountiful” on Lifetime television and is among those competing for the honor at the Emmy’s on Sunday night.

The Broadway show from which the movie was made won her a Tony Award last year.

“The Trip to Bountiful” by Horton Foote involves a “woman who has to live with a daughter-in-law who hates her and a son who does not dare take her side.”

While the unhappy family lives in a Houston apartment, Carrie Watts dreams of returning to Bountiful, where she was raised. She eventually runs away and embarks by bus to her destination. She meets several people along the way and upon her arrival, she is whisked back to Houston by her son and daughter-in-law.

Tyson was born on December 19, 1933 in Harlem to Theodosia, a domestic and William Tyson, who worked as a carpenter, a painter and any other jobs he could find. Both her parents were immigrants from the island of Nevis of the Federation of Saint Kitts and Nevis in the West Indies.

Her father arrived in New York City at age 21 and was processed at Ellis Island on August 4, 1919.

Tyson was discovered or found by a photographer for Ebony magazine and became a popular fashion model. Her first acting role was on the NBC series ‘Frontiers of Faith’ (as ‘Tony’) in 1951.

Her first film role was in ‘Carib Gold’ in 1956, but she went on to do more television work, such as the celebrated series East Side/West Side and the soap opera ‘The Guiding Light’ and never looked back.

Tyson has also been nominated for the Academy Award for Best Actress, and the Golden Globe Award for her performance as Rebecca Morgan in Sounder (1972). For this role she also won the NSFC Best Actress and NBR Best Actress Awards and was nominated for a BAFTA Award. On May 21, 2014, she was awarded an honorary Doctorate of Humane Letters from Columbia University.

This is Tyson’s tenth Emmy Award nomination. She has won three in the past, including two for ‘The Autobiography of Miss Jane Pittman’(1974).