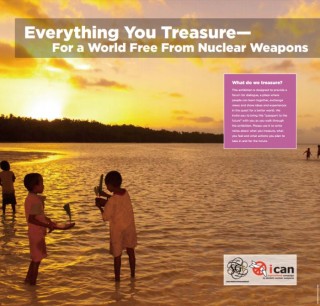 NUR-SULTAN, Kazakhstan and TOKYO, Oct. 2, 2019 /PRNewswire-HISPANIC PR WIRE/ — The exhibition “Everything You Treasure — For a World Free From Nuclear Weapons” is on display in the Library of the First President of the Republic of Kazakhstan – Elbasy in Nur-Sultan (Astana), from October 2 – 13, to mark the 30th anniversary of the end of nuclear weapons testing at the Semipalatinsk nuclear weapons test site and the 10th anniversary of the Treaty on a Nuclear-Weapon-Free Zone in Central Asia (CANWFZ).

With an estimated 1.5 million of its people suffering the effects of the testing of 456 nuclear weapons at Semipalatinsk over a 40-year period, Kazakhstan is known for its commitment to ridding the world of nuclear weapons. On August 29 this year, it became the 26th country in the world to ratify the Treaty on the Prohibition of Nuclear Weapons.

Cosponsored by the Soka Gakkai International (SGI), the International Campaign to Abolish Nuclear Weapons (ICAN) and the Library of the First President of the Republic of Kazakhstan – Elbasy, this showing of “Everything You Treasure” aims to attract support for the nuclear ban treaty and to galvanize further interest in this issue in Central Asia. Kazakhstan is the 21st country in which it has been shown, and this is the first showing in the Russian language.

The exhibition asks viewers to consider how all they treasure in life would be threatened by nuclear weapons. It reexamines the nuclear weapons issue from diverse perspectives including environmental, medical, economic, human rights, energy, spiritual, gender, generational and security aspects.

Amerkhan Rakhimzhanov, Director of the Library of the First President of the Republic of Kazakhstan – Elbasy, Kuanysh Sultanov, Chairman of the Human Rights Commission of Kazakhstan, and Hirotsugu Terasaki, Director General of Peace and Global Issues of SGI, spoke at the opening ceremony that was attended by 100 people.

Amerkhan Rakhimzhanov commented, “It is especially exciting for me to hold within this building this traveling exhibition. The Library of the First President deeply values partnerships with both local and international like-minded people.”

In his message to the opening (https://www.daisakuikeda.org/sub/resources/works/lect/20191001-msg-nuke-abol-kazakhstan.html), SGI President Daisaku Ikeda expressed his respect for Kazakhstan’s contributions to nuclear abolition, stating: “Semipalatinsk was the venue for the signing ceremony for the Treaty on a Nuclear-Weapon-Free Zone in Central Asia. It was also a pivotal site for a popular movement opposing nuclear weapons…, the Nevada-Semipalatinsk Movement that famously developed into a global grassroots effort to ban nuclear weapons testing and nuclear weapons themselves.”

The exhibition “Everything You Treasure — For a World Free From Nuclear Weapons” (https://www.sgi.org/in-focus/2012/eyt-world-free-nuclear-weapons.html) was jointly created by the Soka Gakkai International (SGI) Buddhist network and the International Campaign to Abolish Nuclear Weapons (ICAN), 2017 Nobel Peace Prize winner. It was first shown in 2012 in Hiroshima and has been shown in 90 cities around the world.