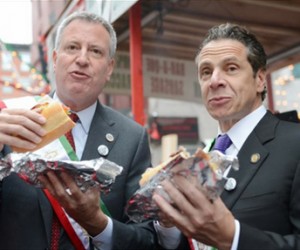 News Americas, NEW YORK, NY, Fri. Sept. 19, 2014: Irony of ironies! New York City’s Feast of San Gennaro, the largest public event in the city freed of gangster control, is in fact no better under the control of a group of individuals who have made the feast into a very good business for themselves while producing an event that is largely nothing more than an over sized 10-day street fair that does nothing to advance appreciation or understanding of our Italian American community.

I have chronicled in my documentary from 2011, the good and the bad and the very non-Italian character of the Feast and how it does nothing to advance our Italian American community. But now the NY Daily News in Friday’s edition, September 19, 2014, in an investigative report, has proven how seedy the organizers are and why they have no right to be in control of the Feast any more than monsters did in the past.

What the Daily News did is investigate the finances of the Feast and where all the so called not-for-profits revenues that supposedly are to benefit worthwhile Italian efforts like for example – the Italian American Museum in the heart of Little Italy (but which gets absolutely nothing from the Feast)  Rather the money goes “nowhere.”

Read all about it in the Daily News here.

The charity is running one of the biggest tourist attractions in the city — the Feast of San Gennaro in Little Italy  but gave away only a tiny fraction of the more than $4 million it raised from 2007 to 2012, a Daily News investigation has found.

Over those years, the group Figli di San Gennaro, took in $4.4 million in gross revenue, but gave up only $210,500 of that to charity. That’s about 4.7% — just slightly better than when the Mafia was running the feast.

Of that, $50,000 went to the Most Precious Blood Church in Little Italy where the Mass celebrating St. Gennaro takes place. Another $1,000 went to a scholarship named after the former Figli chairman, the late Frank Macchiarola.

Non-profits like the San Gennaro group generally donate at least 60% of what they raise to charities, according to Daniel Borochoff, of Charitywatch, a group that monitors charitable giving. Well-run charities usually give 75%, he said. Not the less than 5% the Feast organizers do.
Figli’s tax forms for 2007 through 2012 spell out clearly where about $1.5 million of $4.4 million went — insurance, legal fees, a minimal payment to the monitor, and a fee to the city that’s 20% of whatever the group takes in. But during that time Figli listed another $3 million simply as “direct expenses” with no further explanation.

The even larger problem is a lack of a moral compass in the Italian American community any organizations or just a group of credible Italian Americans leaders who can stand up at times like this and put a halt to this.

What Arizona can teach Republicans about immigration – MSNBC

Rumour has it: Rocker Graham Parker is back