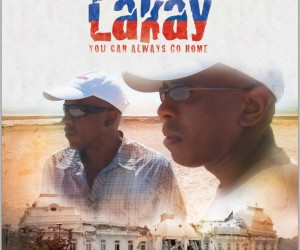 News Americas, MIAMI, FL, Thurs. Oct. 23, 2014: A film about two brothers who return to Haiti in the immediate aftermath of the Haitian earthquake to find loved ones, has opened in several major U.S. theaters around the country.

The documentary ‘Lakay’  made its theatrical debut in Chicago and Miami on October 17th.   The screenings will expand to include both coasts on October 24th.

‘Lakay,’ Creole for “home”, was shot in Port-Au-Prince and Chicago after the 2010 earthquake. With Port-Au-Prince, Haiti in ruins, towns destroyed and families displaced brothers, Alexius and Romeo, are on a mission to locate and find their loved ones.

The filmmakers reveal the tragedy caused by this natural disaster from an intimate and personal perspective.

The film was also produced and written by Hugh Grady, an American actor and filmmaker originality from Detroit, MI.  Macdanne Edmond also gets producer credit.

‘Lakay’ was selected as an official entry in the documentary category of The 9th Annual Harlem International Film Festival.  Stars are Tirf Alexius, Remoh Romeo and Hugh Grady.

“Lakay isn’t just about capturing history: it’s about  family – my family,” said director  Tirf Alexius. “I’ve learned so much about myself and my Haitian brothers and sisters. For me, Lakay was 28 years in the making. It  captures how even in the face of tragedy we find  moments of inspiration and laughter; ways to  strike a balance between suffering and joy. To figure  it all out, sometimes you just need to go home!”

For more see Lakaydoc.com. The film was shot in Haiti and Chicago and runs for : 1 hr 23 mins.

Lakay is being shown at the following theaters: