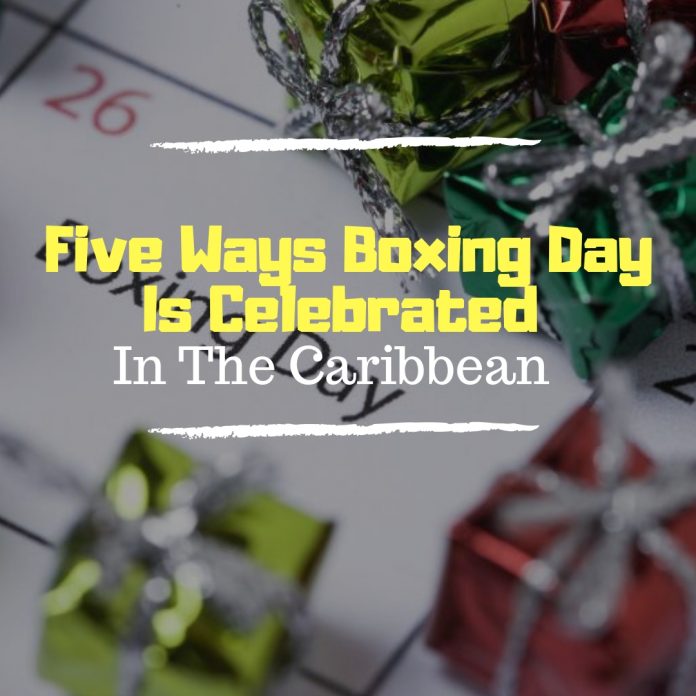 News Americas, NEW YORK, NY, Weds. Dec. 26, 2018: Unlike here in the U.S., the day after Christmas is celebrated in the Caribbean as in most British former colonies as Boxing Day.

This day hearkens back to slavery, when slave owners would give their slaves the day off and some even ‘boxed’ up some left overs and gave to them, hence the history of the ‘box’ as in Boxing Day. Today, in several Caribbean former colonies and current territories, the Day in celebrated often as a big carnival or street party. Here are five unique ways these Caribbean nations celebrate Boxing Day.

In Bermuda, Boxing Day includes the Gombey dance troupes, who dance down the street and alleys. The Gombeys appreciate a little cash if you’ve got it which goes toward making sure their elaborate costumes stay in good shape. The Gombey tradition on the island goes back to at least the early 1800s – it’s a vibrant blend of African, Native American, Caribbean and British cultures and is distinctly Bermudian.

In the Bahamas, Boxing Day is the day for the colorful street carnival, Junkanoo. The festivities kick off on Boxing Day and continue into the New Year. The most popular belief is that it evolved from the days of slavery when the slaves were given three days off during the Christmas season and they used it to celebrate by singing and dancing in colorful masks, traveling from house to house, often on stilts.

Over in Belize, the day is usually celebrated with John Canoe or Jankunu, also known as the Wanaragua. This dance originated in times of slavery and is a similar masquerade party that includes rhythmic Garifuna dance.

In Turks and Caicos, the masquerade tradition on Boxing Day is the Maskanoo festival which is also celebrated with elaborate costumes, street dancing, and live music in Providenciales.

Every year on Boxing Day, several horse racing competitions are held in Barbados, The British Virgin Islands and in Antigua and Barbuda. The Barbados Turf Club hold some of the richest horses’ races of the year at the Garrison Savannah. The Garrison Savannah is also home to one of the largest collections of antique cannons anywhere in the world. The cannon rings the race track around the last turn.

Tourist Arrivals To The Caribbean Dropped By 65% Last Year, But A Wave Of Digital Nomads Might Come To The Rescue

Luiz Ros of the Inter-American Development Bank On How Business Can Fight … –...