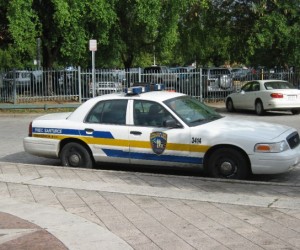 News Americas, SAN JUAN, Puerto Rico, Weds. Oct. 8, 2014: He took an oath to uphold the law but instead a 49-year-old former sergeant in the Police of Puerto Rico has pleaded guilty to breaking it.

Jorge Fernandez-Aviles yesterday pleaded guilty to robbery and firearms charges for his role in a July 2012 robbery in Bayamon, Puerto Rico.

According to court documents, Fernandez on July 14, 2012, went with Officers Lopez-Torres, Ramos-Figueroa and David Figueroa, 32, Ramos-Figueroa’s civilian cousin, to the airport, where they picked up a marked patrol car from Officer Alexander Mir Hernandez before a planned home robbery.  They drove the patrol car to meet civilian Fernando Reyes-Rojas and then went together to the location of the robbery.

Upon entering the house, the officers identified themselves as police, falsely claimed they were executing a search warrant, and ordered several individuals in the garage to the ground and searched for weapons.   While Figueroa watched the occupants, Sergeant Fernandez, Officer Lopez-Torres, Officer Ramos-Figueroa, and Reyes-Rojas searched the property, and Reyes-Rojas found cocaine in a shed in the backyard.

A few days later, Reyes-Rojas met with Lopez-Torres and gave him money from the proceeds of the sale of the cocaine he took on the day of the robbery.  Officer Lopez-Torres split the money with Sergeant Fernandez-Aviles and Officer Ramos-Figueroa.

On Oct. 3, 2014, David Figueroa, 32, pleaded guilty to robbery and civil rights charges for his involvement in the robbery. Officer Mir-Hernandez, 40, also pleaded guilty on Oct. 3, 2014, to one count of false statements for lying to federal agents about his role in the July 2012 robbery and to a civil rights crime for an unrelated December 2013 robbery.  Sentencing for all three is scheduled for Jan. 9, 2015.

Officer Pedro Lopez-Torres, 35, and Luis Ramos-Figueroa, 38, were charged by information on June 25, 2014, for their roles in the July 2012 robbery and other crimes.  Lopez and Torres pleaded guilty before U.S. District Judge José A. Fusté the same day.  Fernando Reyes-Rojas, a civilian, has been indicted for robbery, drug, and firearms charges for his involvement in the July 2012 robbery.  Reyes-Rojas is scheduled for trial on Nov. 3, 2014.

N.S.A. Said to Have Spied on Leaders of Brazil and Mexico