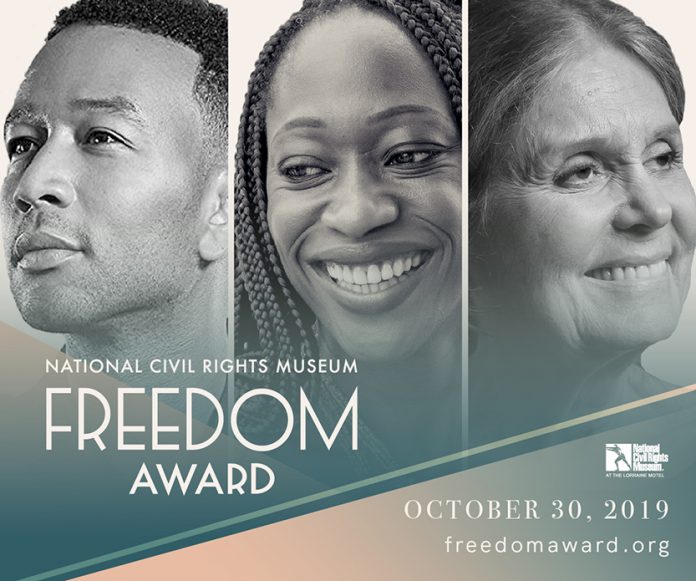 News Americas, Memphis, TN, USA, Sept. 23, 2019:  JOHN LEGEND, HAFSAT ABIOLA, and GLORIA STEINEM are the honorees selected for the National Civil Rights Museum’s 28th Freedom Award to held on October 30. Honorees are selected for their many achievements and contributions on a national and global scale in the name of equality, social justice and freedom for all.

John Legend is an award-winning entertainer, social justice activist and philanthropist. Legend has worked in music for over 20 years becoming the youngest artist to complete the prestigious EGOT as an Emmy, GRAMMY, Oscar and Tony Award winner. His musical work on films highlighting the Civil Rights Movements, such as Selma and advocacy for education have lauded national and international acclaim. He founded Show Me Campaign to break the cycles of poverty for children, and most recently, Let’s Free America campaign. He is also a former national board member for Teach for America. Legend continues to use his larger-than-life platform to inform and advocate on behalf of disenfranchised populations.

Hafsat Abiola, president and CEO of Women in Africa, is a noted Nigerian human and civil rights activist.  Since age 19, she has been working to ensure democracy and economic fairness in Nigeria in the name of her deceased mother and father. An evolving changemaker in both Nigeria and the United States, Abiola uses her global platforms to empower women through training and leadership development and strengthen civil society in Nigeria and other African countries through her founding organization, KIND.

Gloria Steinem is a feminist organizer, political activist and award-winning writer. The founder of Ms. Magazine and author of countless books, textbooks and essays, Steinem has dedicated decades to freedom for women, children and underserved populations globally. She co-founded foundations, including the National Women’s Political Caucus, the Ms. Foundation for Women and the Women’s Media Center in the United States. Most recently, she received the Presidential Medal of Freedom from President Barack Obama and was the subject of the HBO documentary, Gloria: In Her Own Words. She was a member of the Beyond Racism Initiative, a three-year effort on the part of activists and experts from South Africa, Brazil and the United States to compare the racial patterns and to learn cross-nationally. She is currently traveling the globe on a book tour for her latest work, The Truth Will Set You Free, But First It Will Piss You Off.

“These three honorees have devoted themselves to lifting communities of women, protecting our youngest and most vulnerable and have effectively utilized the power of community organizing to promote change,” said Terri Lee Freeman, National Civil Rights Museum President. “They have drawn on the concept of peaceful protest, recognizing the freedom fighters and warriors that have gone before them.  We are excited to share their stories and recognize their achievements.”

Additionally, Freedom Award will pay tribute to the Green Book, also known as the Negro Travelers’ Green Book, that identified safe accommodations and services for African Americans traveling during the Jim Crow Era, which included the Lorraine Motel, the current site of the National Civil Rights Museum.

Tickets and sponsorships are available at freedomaward.org.

About the National Civil Rights Museum

The NATIONAL CIVIL RIGHTS MUSEUM, located at the historic Lorraine Motel where civil rights leader Dr. Martin Luther King, Jr. was assassinated, gives a comprehensive overview of the American Civil Rights Movement from slavery to the present. Since the Museum opened in 1991, millions of visitors from around the world have come, including more than 90,000 students annually. Serving as the new public square, the Museum is steadfast in its mission to honors and preserves the site of Dr. Martin Luther King, Jr’s assassination.  We chronicle the American civil rights movement and tell the story of the ongoing struggle for human rights, serving as a catalyst to inspire action to create positive social change.  A Smithsonian Affiliate and an internationally acclaimed cultural institution, the Museum is recognized as a 2019 National Medal Award recipient by the Institute of Museums and Library Services (IMLS), the top national honor for museums and libraries.  It is a TripAdvisor Travelers’ Choice Top 5% U.S. Museum, USA Today‘s Top 10 Best American Iconic Attractions; Top 10 Best Historical Spots in the U.S. by TLC’s Family Travel; Must See by the Age of 15 by Budget Travel and Kids; Top 10, American Treasures by USA Today; and Best Memphis Attraction by The Commercial Appeal and the Memphis Business Journal.

Greece’s Left and the European Union: On the Need for an Anti-Euro and Anti...

These migrants were separated from their children — and aren’t sure they should be...

World Briefing | The Americas: Venezuela: Panel Will Investigate Roots of Cancer That Killed...