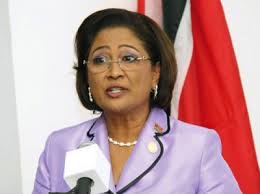 News Americas Now, Trinidad and Tobago, Wednesday, February 4, 2015- The following is the full text of the speech by Trinidad and Tobago Prime Minister Kamla Persad-Bissessar announcing the firing of the country’s Attorney General and Minister of National Security:

That I will conscientiously, impartially and to the best of my ability discharge my duties as Prime Minister, And do right to all manner of people without fear or favour, affection or ill-will.”

I have strived in every way to do so.

I have been criticized for removing too many office holders over the past four years as I was seeking to ensure the public interest was secured.

While it may have not served narrow political interests, I took the decisions necessary to serve the broader national interest, above and beyond everything else.

I did so while ensuring all matters were fairly and reasonably considered and all parties were given an opportunity to be heard and evaluated.

Despite the fact that we are today on the cusp of a general election, I want to make it clear my considerations today will be no less driven by any other than that of what is best for the nation.

For me, my position as Prime Minister has always been a selfless task and one which I felt humbled to have been granted through the will of the people and the grace of God.

There have been allegations being made by the current Director of the PCA, regarding the Attorney General.

The Attorney General has vehemently denied the allegation.

The Trinidad and Tobago Police Service has confirmed that an investigation is being conducted into the matter.

More recently, the Minister of National Security has become embroiled in the matter.

It is alleged that the Minister, upon the advice of the Attorney General, telephoned the Director of the PCA to query whether he had withdrawn a statement.

That alleged incident also forms part of the police enquiry.

The Minister has confirmed that he did in fact make such a call.

Upon placing that call the Minister did not consult with me nor make it known the details of his conversation with the Director of the PCA.

The Minister also did not report to me on the alleged request of the Attorney General either before or after his call to President of the PCA.

The question is whether the Minister was not under an obligation to inform me, as the Prime Minister, that he made such a call.

The situation today would have been very different had such a request not been made and this matter been brought to my earlier attention.

I have requested and received statements from Honourable Attorney General and the Honourable Minister of National Security.

I have perused both those statements as well as the reported statements of the Director of the PCA, and from my perusal of same I have discerned that the material facts contained therein are in conflict with each other.

I cannot be judge and jury to determine the veracity of any or all.

While I am not in a position to determine neither guilt nor innocence in this matter it is of grave enough consequence to warrant serious consideration and immediate action.

I cannot and will not sit idly by while the Office of the Attorney General and that of the Minister of National Security and the head of the Police Complaints Authority are being compromised and brought into disrepute by such allegations that have warranted a police enquiry.

Those office holders preside over the administration of justice, law and order and so cannot remain in those positions while these investigations into allegations are made.

I cast no aspersions on the capacity or performance of those that hold these positions but cannot have these offices be so embroiled in conflict and controversy eroding public confidence in the institutions which they lead.

Without prejudice to the outcome nor denial of any party to due process and a fair and just determination in the matter, I have asked for and received the resignation of both the Attorney General and the Minister of National Security.

What is also of equally grave concern to me, as it must be to the nation, is the compromised position of the Director of the PCA, arising out of this situation.

The question must arise as to why he did not make it known to me or to His Excellency President Anthony Carmona when the position of heading the PCA was offered to him in November.

Further, why did he wait until now to make public this matter?

If the Opposition Leader also knew of the issue at the time when he was consulted about the appointment by myself –we had discussions- and the President it would also have been obligatory upon him to have informed His Excellency.

Failure by the Opposition Leader to do so at the time does create doubt to any independent observer as to why no mention was made at the time of appointment and why was there such a delay between November and when the appointment and now in making known the matter.

Given the political sensitivity and nature of the alleged incidents it would have been not just prudent but mandatory that both myself and His Excellency, the President be informed.

Withholding such information has seriously compromised the appointment of the Director of the PCA.

It is my view therefore, that the Director of the PCA should immediately resign and/ or his appointment be revoked.

The PCA is an independent institution and public confidence must remain strong if that body is to carry out its duties without fear or favour and be perceived by all to so do. Justice must only be done seen to be done.

It would be impossible, given the present issue that the current head can continue to hold this position without the very institution he leads also being called into question.

The head of the Police Complaints Authority has the responsibility to investigate complaints against police officers.

He would find himself doing so now while he himself has filed a matter for investigation to the Commissioner of Police.

The threat of conflict of interest or perception thereof clearly emerges and compromises the role of the head of the PCA.

Further, questions also arise on the role of the Opposition Leader in the matter.

Did the Opposition Leader not have a moral if not legal obligation to inform me as Prime Minister and His Excellency the President about the personal involvement of a witness in a defamatory statement involving himself, the Leader of the Opposition

One has to be mindful that public office is not used for private gain.

Had there been a disclosure by the Opposition Leader of the personal interest in a legal matter involving himself and the Director of the PCA at the point of his nomination to be head of the PCA, the conflict of interest would have been declared.

Again the question arises and I want to say there are more questions than answers as to whether there was any deliberate attempt to hoodwink His Excellency and the Prime Minister in making the appointment by such nondisclosure.

I urge that an independent probe be conducted into these circumstances involving the Attorney General, the Minister of National Security, the head of the Police Complaints Authority and the Opposition Leader.

And so let the chips fall where they may.

I recognize that this cannot be an easy time for all individuals affected but know their duty to country first would bring to bear the burden of the action necessary to be taken.

I would advise His Excellency the President as follows

To revoke the appointments of the following – myself as Minister of the People and Social Development;

I wish to publicly thank these Honorable gentlemen for their support and contribution in building Trinidad and Tobago.

In light of this I wish to advise that in accordance with the Constitution of the Republic of Trinidad and Tobago, I have today advised His Excellency the President to appoint the following:

2. Ms. Christine Hosein, as Minister of the People and Social Development

Ms. Newallo-Hosein is currently the Advisor to the Prime Minister at the Ministry of the People and Social Development.

She was previously the Advisor to Lands and Marine Resources from August 2013 to August 2014.

Ms Newallo-Hosein is certificated in basic German, Spanish and French and Communication studies.

She also served as a Director of YESTT, a coordinator for the Caribbean Centre for Human Rights – Victim Support Unit.

In 2004, she was the recipient of a Mentor Award re: the Prime Minister’s Award for innovation and Invention.

We welcome her on board

Mr. Sancho is a prolific sportsman having represented Trinidad and Tobago in the field of football for several years.

He is a former National football player for Trinidad and Tobago and has toured various countries across the world and represented many clubs at the local and international levels.

Brent Sancho is the holder of an Associate Degree in English from Essex Community College in the USA, and a Bachelor of Arts degree in Psychology from St. John’s University in the USA.

4. Mr. Kwasi Mutema as Minister in the Ministry of National Security

He is a former lecturer at the Butler Institute of Lifelong Learning and a coordinator of the Save-One Scholarship Programme assisting students in underdeveloped areas to develop themselves academically.

Mr. Mutema resides in Barataria and is currently the deputy chairman of the Board of Governors of the University of Trinidad and Tobago.

Brigadier General Alfonso has served this country as Aide de Camp to the President, His Excellency Noor Hassanali.

He is a former Commanding Officer of the Trinidad and Tobago Regiment, and was the first enlisted man to ascend to the position of Chief of the Defence Staff where he served from 1994 to 1999.

Since retirement Brigadier General Alfonso has served as Security Adviser and Chief Security Officer at Petrotrin 2000-2005, as Chairman of PLIPDECO 2010 – 2011, Executive Director at Prime Minister’s Residence and Diplomatic Centre and currently as the Director General of the National Security Training Academy.

Brigadier General Alfonso in 2012 was awarded the Medal of Merit Gold for Community Service.

6. Mr. Garvin Nicholas, as Attorney General of Trinidad and Tobago.

Mr. Garvin Nicholas, an attorney at law since 2002 is a former temporary senator, local government councillor, press secretary to the Prime Minister and High Commissioner to the Court of St. James’ and Ambassador Extraordinary and Plenipotentiary to Denmark, Finland, Germany, Norway and Sweden.

I will continue to lead this nation with the same resolve to maintain the inviolable principles of good governance.

You can rest assured that I have both the courage and personal fortitude to do what is right whenever it is necessary to so do regardless of the consequences.

It is what you expected when you elected me to office and I will never shirk this responsibility to you and the office I am sworn to uphold.

Gone are the days when a government may feel it does not need to give account for its actions or would undermine public confidence bestowed on their officials.

Some would have us return to these old ways but that will not stand as long as I am your Prime Minister.

The changes being wrought today in ensuring accountability are of greater importance now than ever before.

The old standards have changed and given way to new demands and expectations.

The shift in conscience and consciousness is not without its shock waves as the public sees decisions being taken that are unusually bold and strident in upholding the ideals for which they voted so overwhelmingly.

May God continue to guide my deliberations on the nation’s behalf and may God bless us all.