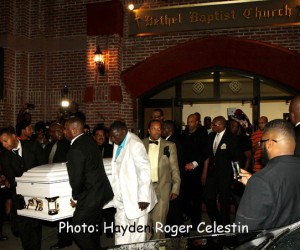 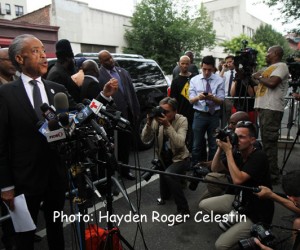 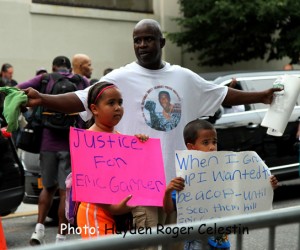 News Americas, BROOKLYN, NY, Weds. July 23, 2014: The man whose last words: “I can’t breathe” has become a mantra now with advocates for tougher consequences for police brutality, was laid to rest following a funeral on Wednesday, July 23rd.

Rev. Al Sharpton addressed funeral goers as friends, family members, and community leaders came together to remember Eric Garner, 43, the Staten Island husband, father and grandfather, who died after a police officer tried to constrain him with a chokehold.

Sharpton argued that the officers involved in Garner’s arrest last Thursday – one of whom appeared on video putting him in a choke hold – need to face more serious consequences than those that have been promised so far.

The families of Amadou Diallo and Sean Bell – two men who also died in police-involved incidents, also attended the funeral as did Public Advocate Letitia James who said her office will demand policy changes at the NYPD.

Prosecutors and NYPD Internal Affairs, meanwhile, are conducting an investigation into the incident. The four EMS workers who responded to the scene have also been placed on modified duty.

The medical examiner’s office has yet to determine the exact cause of Garner’s death.