News Americas, NEW YORK, NY, Mon. Jan. 29, 2018: The 2018 Grammy’s last night had its share of notable ‘Caribbean’ moments – from performers born in the region to award winners, to comedic moments, to artists using their voice to make a serious social statement. Here are seven top takeaways from last night 60th Grammy’s that are sure to make the region and its Diaspora proud:

1: Cuban-born recording artist Camila Cabello took a strong stance for Dreamers last night at the Grammy’s, insisting that she too was a ‘Dreamer’ as she introduced U2 for a performance on the Hudson with the Statue of Liberty as the background. Both Cabello’s speech and U2’s performance was a poignant spotlight on the immigration debate that is raging in the US under the Donald Trump administration as the band performed: “get Out Of Your Own Way.” Here is her full speech in text or see it below:

“Tonight, in this room full of music’s dreamers, we remember that this country was made by dreamers, for dreamers, chasing the American dream,” the former Fifth Harmony member said. “I’m here on this stage tonight because just like the Dreamers, my parents brought me to this country with nothing in their pockets but hope. They showed me what it means to work twice as hard and never give up. And honestly no part of my journey is any different from theirs. I’m a proud, Cuban-Mexican immigrant, born in eastern Havana, standing in front of you on the Grammy stage in New York City. And all I know is that just like dreams, these kids can’t be forgotten and are worth fighting for.”

4: One of the great surprise moments of the Grammy’s was an appearance on stage by Mr. Bommbastic, Shaggy, alongside British singer Sting, as they performed from their latest album. Sting started the performance with his 1987 hit “Englishman in New York” which included the line: “I’m a legal alien in New York.” He was then joined on stage as they veered of into a bit of their latest single ‘Don’t Make Me Wait.’

5: Puerto Rican singer Luis Fonsi (l), and and Daddy Yankee, (r.) had the audience on their feet for their performance of Despacito. However, while the song had been nominated for several Grammy’s, including Song of the Year, it failed to win. 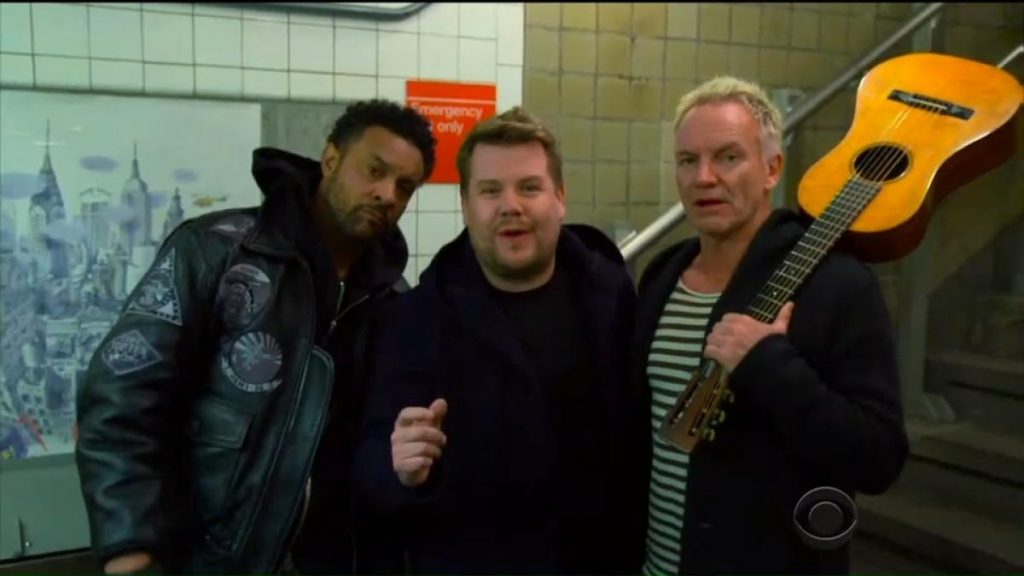 6: Jamaican-born singer Shaggy, along with Sting and Grammy host, James Corden, teamed up for a ‘subway karaoke’ session which played on just how tough New Yorkers can be as well as how blasé to celebrities. All three went undercover and sang much to the chagrin of commuters.  The scripted segment saw the trio attempt to play The Police’s “Every Breath You Take” to no one’s delight. Then they tried Shaggy’s “It Wasn’t Me.” Eventually, they decide that everyone would like the opposite of what people generally want at a concert. They cast aside the hits and played “the new stuff.”

7: The 2018 Reggae Grammy this year went Damian Marley.  It was the third reggae Grammy for the singer who beat out Chronixx, Common Kings, J Boog and Morgan Heritage for the award.