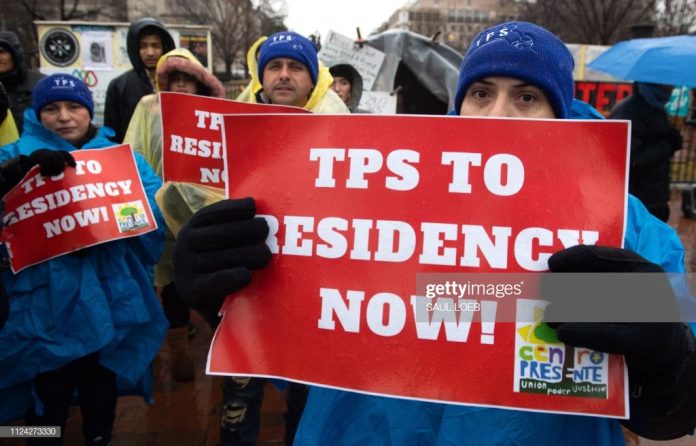 News Americas, MIAMI, FL, Fri. Mar. 8, 2019: The Donald Trump administration has begrudgingly announced that it will be extending the Temporary Protected Status (TPS) statuses for immigrants from Haiti, Sudan, Nicaragua and El Salvador to comply with an October 2018 court ruling in the U.S. District Court for the Northern District of California.

U.S. District Judge Edward Chen last year granted a preliminary injunction stopping the administration and the Department of Homeland Security, (DHS), from terminating TPS for immigrants from the four countries.

This means that the DHS will now be automatically extending the validity of TPS-related documentation, allowing these immigrants to work and live in the US legally, as well as travel and return legally, through January 2, 2020.

The extension will remain in effect, according to a March 1, 2019 Federal Register notice, as long as the preliminary injunction remains in effect and they do not win on appeal.

The DHS has warned that if the preliminary court injunction is reversed and that reversal becomes final, the department will allow for an orderly transition period.

But until such time, Employment Authorization Documents (EADs), Forms I-797, Notice of Action (Approval Notice), and Forms I-94 (Arrival/Departure Record) of the immigrants with TPS approval from the four nations will be valid through 8 months before the 2020 Presidential elections.

The extension will give over 300,000 people who have been allowed to temporarily live and work in the U.S. after war or major natural disasters in their own countries, some breathing room but it is still not a permanent fix.

Still as Jessica Karp Bansal, co-legal director at the National Day Laborer Organizing Network. “Similar extensions will be announced every nine months as long as the Ramos appeal continues (and) there is no need to pay a fee or file any application; the extension is automatic.”

The DHS’ move to comply with the court comes as House Democrats say they will reintroduce a new Dream Act bill with new to also provide for protections for TPS and Deferred Enforced Departure immigrant recipients.

California Rep. Lucille Roybal-Allard will reintroduce the measure on March 12, 2019 as the Dream and Promise Act of 2019. It will call for permanent legal protections and a path to citizenship for so-called Dreamers – undocumented immigrants brought to the U.S. as children.

The bill will also include protections for TPS and DED recipients and offer protections from deportation for U.S. immigrants who can’t return to their home countries due to a crisis, such as natural disaster, epidemic or civil war.

“TPS and DED protections are included because President Trump’s cruel and reckless actions have increased the urgency to address these issues and protect these individuals in our communities,” Roybal-Allard’s office said.

House Speaker Nancy Pelosi has reportedly reserved the bill number HR 6 for the legislation, which has long been a top priority of House Democrats.

Here Comes Uniting For Ukraine, But What About Uniting For Africa, Haiti Or Central America?

BVI bumped up to high risk level 3 by CDC; Cayman...