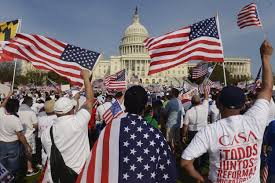 The House GOP has donned full riot gear and is now coming hard after the immigrants President Obama has tried to help. While all, including John Boehner, were ready to sit on their paws last year and do nothing, every conservative lawmaker, even the lesser known ones, are suddenly emboldened to repeal what the President has done, even if it means taking an ignorant stab at the funding of the U.S. CIS and the Department of Homeland Security.

Take for instance Rep. Robert Aderholt. I’m sure you have never heard of this bloke before. But suddenly this Alabama Republican is in the spotlight – not for anything good – but for a bill that repeals “executive immigration overreach” and toughens enforcement.

Aderholt last week introduced this bill that also calls for accelerated deportations of children who come here illegally from Central America while also calling for the restoration of Secure Communities, the enforcement program that the President halted using his executive power.

In light of the Paris terror attack and the fact that President Obama will simply veto any action to undo his immigration plan, the GOP is doing what it always does – waste a lot of time doing nothing but attacking the President while spreading fear and hate.

Hate mongering and divisiveness will get them nowhere especially as the numbers are clear – the national demographics have shifted dramatically and immigrant and minority voters will have the last laugh in 2016.

That is next year GOP. It is time to stay true to the symbolic elephant sign of your party and show strength, honor and stability in leading for the next two years. This includes respect for immigrants and finding a feasible solution to the illegal immigration crisis rather than using immigrants as red meat to feed the vipers on the far right in your party.

John Boehner and company would be wise to take note of some figures coming out of the Immigration Policy Center, (IPC). According to their recent report: ‘New Americans in the Voting Booth: The Growing Electoral Power of Immigrant Communities: “Between 1996 and 2012, the number of New American registered voters rose by 10.6 million—an increase of 143.1 percent.”

All of the data from the recent mid-terms point to the fact that the GOP only won the House mainly based on white male and older white voters in those areas where the immigrant presence is still only minuscule. To be fooled by the takeover of the Senate and the increase in the House based on this past election would be reckless.

Number don’t lie and according to the IPC, “there were 18.1 million New Americans registered to vote in 2012, totaling 11.8 percent of all registered voters.

GOP take note! The White House will be lost to you forever once you continue down the anti-immigrant path you seem bent on continuing.

Will It Be Obama 2.0 For Immigrants?

Cuba turning over Florida couple, children to US