News Americas, NEW YORK, NY, Thurs. Dec. 4, 2014:  Every year, for the past 36 years, ‘Uncle Sam’ through its U.S. State Department, has issued an annual Country Report on Human Rights Practices across the globe. In it, the U.S. Department of State submits reports on the human rights practices of all countries receiving its assistance and all United Nations member states to the U.S. Congress in accordance with the Foreign Assistance Act of 1961 and the Trade Act of 1974. This includes the state of police brutality in these nations.

But for more than 36 years, police brutality in the United States has continued, especially against the country’s population of black and brown men. To document each instance where a black or brown man was killed by a cop in the past 36 years would likely take us more than a year to report.

And the U.S. State Department will of course never cover these cases in its now famous ‘rights report.’ Instead, Uncle Sam is all too quick to pinpoint the “gross human rights violations” committed in Cuba and by the police forces of other nations around the world.

Yet Human Rights Watch tells us, the United States’ own “rights record is marred by abuses related to criminal justice, immigration, national security, and drug policy.”

“Within these areas, victims are often the most vulnerable members of society: racial and ethnic minorities, immigrants, children, the elderly, the poor, and prisoners,” the Human Rights World Report 2014 stated, adding there is racial disparities in the criminal justice system.

That reality again hit home for many yesterday – just over one week after the Ferguson verdict – as another judgment involving a white cop charged with killing an unarmed black man was returned – this time in Staten Island, NY.

Despite video evidence that showed Officer Daniel Pantaleo placing Eric Garner in a prohibited police chokehold during an arrest, he was not indicted by a grand jury. So another cop walks free for killing a man and as Caribbean-American Congresswoman Yvette Clarke said yesterday on Twitter:  “It defies comprehension.”

But the hypocrisy does not stop there.

While this Staten Island grand jury let Officer Pantaleo walk, four month earlier, in August; Ramsey Orta, the young man who filmed the now famous video of Pantaleo and other NYPD police officers confronting Garner as he yelled out 11 times: “I can’t breathe,” was indicted by another grand jury on weapons charges stemming from an arrest by undercover officers earlier that month. 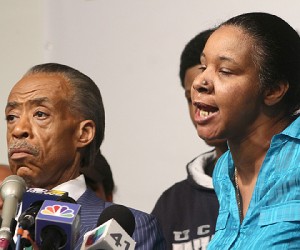 Police alleged that Orta had slipped a .25 caliber handgun into a teenage accomplice’s waistband outside a New York hotel. Orta testified that the charges were falsely mounted by police in retaliation for his role in documenting Garner’s death, but the grand jury rejected his contention, charging him with single felony counts of third-degree criminal weapon possession and criminal firearm possession.

Yet the Staten Island Grand jury on Dec. 3rd, determined there was no probable cause that Pantaleo had committed any crime even though a medical examiner ruled Garner’s death homicide in part resulting from the chokehold, a restraining move banned by the NYPD in 1993.

At a minimum, it was negligent, it was reckless, it was some level of homicide and surely they could have indicted this officer on any number of charges and let a trial happen.

Now the legal burden is on the Department of Justice to decide whether to pursue criminal charges.

In a country being led by a black President and a Justice Department led by a black Attorney General, another black man’s murder at the hands of a White cop goes unpunished.

But the hypocrisy does not stop there. No! While many have applauded four members of the Black Caucus, including Congresswoman Clarke, for raising their hands up to “show solidarity with the protesters” in Ferugson on Tuesday, all four voted AGAINST an amendment in June that would have slowed down the militarization of America’s police forces.

Amendments to H.R. 4435, the National Defense Authorization Act, would have prohibited funds from being used to transfer certain kinds of military surplus to local police departments. Four percent of the Pentagon’s output to police departments is military grade, including 92,442 small arms, 5,235 Humvees, 617 mine resistant vehicles and 616 aircraft.

Yet the bill failed to pass with many black lawmakers including Clarke, also voting against it.

And President Obama’s announcement on police militarization, for example, included no roll backs, just more bureaucracy. Officials said the president wouldn’t tamp down on the flow of equipment from the Pentagon to police departments since the bulk of the gear isn’t military grade.

Instead, they said, Obama would convene a task force on policing, focused on combating crime while building public trust in local law enforcement agencies.

So will that make a difference? Given the proof over the past two decades of police murder and brutality in the United States we feel the words of Garner’s widow sums it up accurately as we say: “Hello no!”

Cuba and Venezuela gets visitation from Iran – spyghana.com