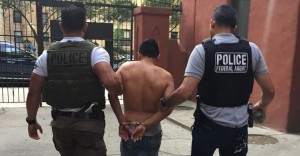 News Americas, MIAMI, FL, Fri. Dec. 8, 2017: If you are an undocumented immigrant living in the U.S., be very careful – especially this holiday season.

Forget the so-called protection offered by sanctuary cities like New York. Donald Trump’s U.S. Immigration and Customs Enforcement (ICE) men are prowling around and rounding up immigrants at court houses across the city – criminal or not – and even inventing some charges to simply grab and detain others.

According to a recent New York Daily article, the number of immigrants arrested or detained by ICE agents at courthouses in New York has gone up 900 percent in 2017 alone. That’s from 11 arrests or attempted arrests in New York last year 110 this year.

Interestingly, as the article points out, about 20 percent of individuals detained by ICE did not have prior criminal convictions while 16 percent were in court for desk appearance tickets or offenses that really did not warrant an arrest.

Some of the immigrants were arrested in family court and even at the Queens Human Trafficking Court, the article added.

There is no denying that the round up many immigrants feared under Trump is here and likely will continue under this administration – unless of course he is removed from office by some miracle.

For now, the reality is that since Donald Trump signed executive orders on immigration to expand the type of criminal offenses punishable by deportation, ICE arrests have increased across the country; by some 40 percent in just his first 100 days in office.

Advocates also have raised the alarm that ICE is using MS-13, or Mara Salvatrucha, a Salvadorean gang whose violence is spreading across America, to detain undocumented immigrants under invented charges. According to Salon, activists in Long Island, NY say ICE is using Operation Matador to round up nearly 350 people for being members of MS-13 or at least claim they are.

ICE agents are also reportedly paying attention to immigrants who are outspoken. A Mexican man who recently spoke with reporters about his longtime girlfriend’s immigration arrest has now been detained himself because he was “in the newspaper.”

Baltazar “Rosas” Aburto Gutierrez was subsequently arrested and is now in the Northwest Detention Center in Tacoma.

Then there are arrests made as routine traffic stops by ICE agents who are happily carrying out Trump’s agenda of ridding the country of black and brown immigrants.

Such blatant attacks of civilians within a democracy are certainly troubling and smacks almost of a Communist or third world dictatorship. But this is now life in Trump’s anti-immigrant America. Undocumented immigrants especially need to keep a low-profile, avoid any run ins with the law, including a DUI or parking ticket, and work as hard as you can to find a way to legalize your status in this country or simply return to the country of your birth before the ICE man cometh!