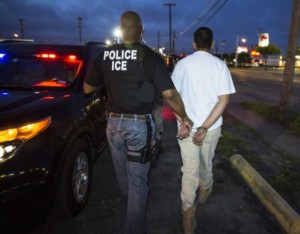 News Americas, NEW YORK, NY, Weds. June 21, 2017: The number of detainees dropping dead in US Immigration and Customs Enforcement’s (ICE) custody for this fiscal year has climbed to 10, according to ICE officials.

The latest immigrant to die in ICE custody is Salvadoran national Carlos Mejia-Bonilla, 44.

Mejia passed away on June 10th from internal bleeding and hemorrhagic shock. He was arrested by the U.S. Border Patrol on August 21, 1993, as an alien who entered the U.S. without inspection and was later released on an order of recognizance.

Mejia was convicted for driving while intoxicated and aggravated driving while intoxicated in 2009 and 2014, respectively. Enforcement and Removal Operations (ERO) New York arrested Mejia on April 1, 2017. On June 8, 2017 he was admitted to the Jersey City Medical Center’s Intensive Care Unit due to gastrointestinal bleeding. On June 10, Mejia succumbed to complications resulting from his condition.

His death comes on the heels of the death of Honduran national Vicente Caceres-Maradiaga, 64, who collapsed while playing soccer on April 30th at the Adelanto Detention Facility in California. He passed away a short time later in an ambulance as he was being transported to a nearby hospital.

Maradiaga was pronounced dead at the hospital and his preliminary cause of death was listed as acute coronary syndrome.

Two Caribbean Countries Have The Most Nationals In The U.S. Federal Bureau Of Prisons

Voices: Another wave of illegal immigration may be near – USA TODAY